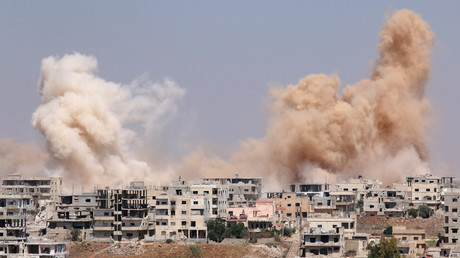 The largest share of Britons surveyed in a YouGov poll for The Times is against military action against Syrian military targets.

Forty-three percent oppose, while just 22 percent support, airstrikes against Syria, with 34 percent unsure whether they back the action.

The poll’s release comes as UK Prime Minister Theresa May is reportedly readying her cabinet to back military strikes on Syria without asking Parliament for consent.

This is contrary to opposition leader Jeremy Corbyn’s position. He is insistent that Parliament must have a say on any airstrikes. His views were echoed by the leaders of both the SNP and the Liberal Democrats.

Various UK MPs and social media commentators from across the political spectrum have taken to Twitter to air their views on the matter.

We need a clear response to the Syrian chemical outrage. But Parliament must be involved before any military action is agreed.
Specifically the Govt needs to explain who is strengthened if and when Assad is weakened. And what happens after.

Assad’s despicable attacks on innocents cannot be brushed under the carpet, the case for action is strong – but the PM would be very wrong to commit the UK to action without the approval of Parliament.

As it seems the Prime Minister is under pressure to join an attack on Syria without consulting Parliament,those who prefer caution should write swiftly, politely and concisely to Mrs May, You can e-mail her by going to https://t.co/DChJFMlD7c & filling in the form you find there

When the most enthusiastic people wanting to Bomb Syria are Donald Trump, Boris Johnson and Dan Hodges, that should be a sign that this is a seriously bad idea with no longer term plan. #NotInMyNameTheresaMay

While the hashtag #NotInMyNameTheresaMay, is now trending on Twitter as the UK public begin to rally against the UK PM, calling for no military strikes against Syria.

So Theresa May admits she’s not sure who’s behind the awful chemical attack, but she’s going to bomb Syria anyway, without the backing of Parliament. This is about to be the start of a very tragic chapter in our history. Complete and utter madness. #NotInMyNameTheresaMay