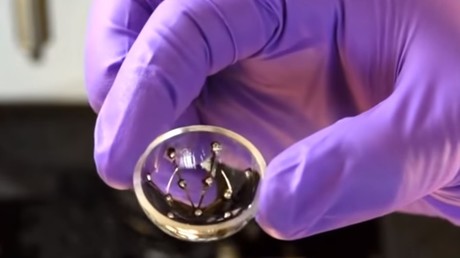 For the first time, researchers have successfully 3D printed a hemispherical surface of light receptors in what has been dubbed a “significant step” towards the creation of a bionic eye.

The groundbreaking development could pave the way for artificial eyes that could help blind people see and improve human vision in general.

Researchers from the University of Minnesota revealed the pioneering step in the academic journal Advanced Materials. The team was able to print the light receptors on a hemispherical glass dome. While 3D printing on flat surfaces is common, printing delicate light receptors on a curved surface is more challenging.

“Bionic eyes are usually thought of as science fiction, but now we are closer than ever using a multimaterial 3D printer,” said Michael McAlpine, the study’s lead author and an associate professor of Mechanical Engineering.

“We have a long way to go to routinely print active electronics reliably, but our 3D-printed semiconductors are now starting to show that they could potentially rival the efficiency of semiconducting devices fabricated in microfabrication facilities,” McAlpine said.

McAlpine and his team have in the past printed a “bionic ear” and have created other life-like artificial organs for surgeons to practice on, including an electronic fabric that could be used as a bionic skin.

The attempts to create a 3D printed eye was inspired by McAlpine’s mother, who is blind in one eye and has often asked him, “When are you going to print me a bionic eye?”

The next step for the team is to create a prototype which has more efficient light receptors, and create a way to print on a soft material that could be implanted into a real eye.