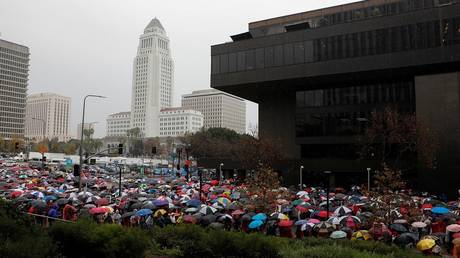 The second-largest school district in the US was paralyzed as 30,000 Los Angeles, California teachers went on strike for the first time in 30 years, demanding a pay raise. Some 480,000 children were affected.

Thousands of teachers and union activists, wearing red, marched down the streets of LA in rainy weather on Monday, demanding from the district and the state to raise their pay by 6.5 percent immediately, to “fully staff” schools with librarians, nurses, counselors and other support personnel, and to reduce class sizes. The union also wants guarantees that public school funding won’t be affected by privatization.

The United Teachers Los Angeles (UTLA) say they number at over 30,000, but LA police estimated there were only 20,000 out in the streets on Monday.

According to School Police Chief Steven Zipperman, information from their District Operations Center and a LA City Fire Department source, the estimated number of demonstrators who gathered at Grand Park was about 20,000.#UTLAStrikepic.twitter.com/JPCe1s7kEv

“Here we are on a rainy day in the richest country in the world, in the richest state in the country, in a state that’s blue as it can be – and in a city rife with millionaires – where teachers have to go on strike to get the basics for our students,” said Alex Caputo-Pearl, president of UTLA.

The protests drew sympathy and support from Democrat politicians in the state legislature, Hollywood writers, Black Lives Matter, and even from Congresswoman Alexandria Ocasio-Cortez (D-New York).

These LA teachers striking against privatization + demanding smaller classrooms/more support for their students is a whole 2019 mood
💃🏿💃🏼💃🏽 pic.twitter.com/iMska5whpH

While the Los Angeles protest looks and feels much like the teacher strikes in Oklahoma, Kentucky, West Virginia and Arizona last April, there is one major difference: unlike those states, seen as important battlegrounds in the 2018 midterms, California is overwhelmingly Democrat.

The Los Angeles Unified School District (LAUSD) is the second-largest in the US by the number of students, after New York City. In the 2017-18 school year, it had a budget of $7.52 billion and employed 26,046 teachers and 34,194 other employees, including 2,465 administrators.

As of 2017, the LAUSD also had $5.1 billion more in liabilities than in assets, mostly due to the mounting health and pension benefits, according to one recent study.

Governor Gavin Newsom was not happy about the strike, urging both the union and the school district to make a deal.

“This impasse is disrupting the lives of too many kids and their families,” Newsom said on Monday. “I strongly urge all parties to go back to the negotiating table and find an immediate path forward that puts kids back into classrooms and provides parents certainty.”

Newsom added that he has proposed a state budget that includes the “largest ever investment” in the LAUSD, which would “pay down billions in school district pension debt.”