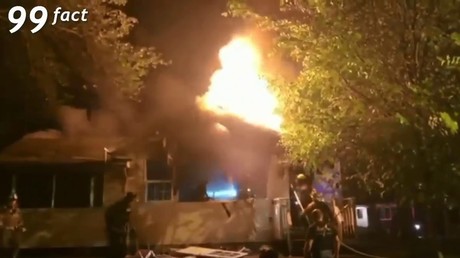 Over a dozen people have been injured, three critically, after a bungalow at a camp for teenage boys exploded and started a massive fire in the US state of New York, according to witnesses cited by local media.

The blast occurred just after midnight at the Quaker Hill cottages in Monroe, New York on Friday, the department commissioner of Emergency Services for Orange County, Vini Tankasali, said, according to WNBC-TV.

At least one of those critically injured was airlifted to the hospital.

Neighbors told the media outlet that the cottages were occupied by Jewish teenage boys from New York City who were enrolled in a Hasidic camp. They said the boys returned to their bungalow, smelled gas, and opened a window. At that point, the building blew up.

Firefighters rushed to the scene and were able to put out the flames in around 40 minutes, according to Tankasali.
The cause of the incident is currently under investigation.