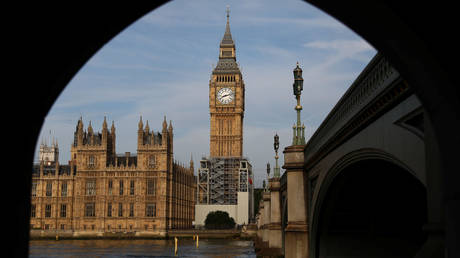 A seventh batch of Integrity Initiative leaks has been dumped by hackers, revealing British government plans to build an umbrella network of organizations across Europe focused exclusively on countering ‘Russian disinformation.’

Hackers, claiming to be linked to the Anonymous collective, have been dumping batches of Integrity Initiative (II) documents online since November 2018, gradually uncovering a major UK government-funded project which secretly conducted Europe-wide anti-Russia influence campaigns while posing as a simple disinformation-fighting charity. Earlier leaks led the II to make their public Twitter account temporarily private and to completely wipe their website pending an “investigation” into the situation.

NGOs under umbrella of government grants

The latest batch reveals a UK-funded program called the EXPOSE Network, which aimed to “upskill” existing “counter-disinformation” organizations by offering grants and training, while their activities would then be coordinated with the British Foreign and Commonwealth Office (FCO) to “ensure effectiveness.”

Organizations named in the proposal for the project included the UK-based Bellingcat, the Prague-based European Values think tank, and the Digital Forensic Research Lab (a project of the arms-manufacturer-funded Atlantic Council). The hackers claim it was these groups and a couple of others which were among the “most eager” to receive nearly £10 million ($13.2 million) in potential government funding, which would be dished out over three years between the summer of 2018 and March 2021.

Andy Pryce, the FCO’s head of counter-disinformation and media development, met with two consortia, one of which is known as the ZINC network (and includes Bellingcat and DFRL), in August 2018 concerning their involvement in the EXPOSE Network. The documents, however, are just proposals, and Bellingcat founder Eliot Higgins has maintained previously on Twitter that his organization has not received FCO funding.

Bellingcat hasn’t received funding or information from the FCO, nor the Integrity Initiative. The document you’re citing in the tweet was a proposal, one they didn’t follow through on with Bellingcat.

Contractors taking part in the FCO project should be able to “handle sensitive information,” have an “awareness of acting on behalf of HMG” (Her Majesty’s Government), and must sign a “strict” non-disclosure agreement. Contractors should also be able to ensure that the network’s outputs are “used by a wide range of media outlets” and “gain prominence on social media.”

A 118-page report titled “Upskilling to Upscale” examines a number of organizations across multiple regions including the Balkans, the Baltics, central Europe, eastern Europe and the Caucasus.

As with most Integrity Initiative leaks so far, the main target of these British government-funded truth-seeking efforts appears to be Russia, with the very first line of the report denouncing “Kremlin-backed disinformation” and focusing exclusively thereafter on Russian “disinformation.” The report also accuses Moscow of trying to “contaminate” the “information ecosystem” of the Western world.

In Georgia and the Balkans, the report claims, Russian propaganda is “smuggled into the national consciousness” in the form of “anti-EU and anti-Western narratives” — a claim that, essentially, anyone who is critical of the EU or the West is a Russian propagandist.

“Integrity Initiative” – a 7th release of documents exposing the workings of this shadowy outfit that wages informational war on dissent and dissenters.

Another newly leaked document reads almost like a sci-fi script and explains how “Russian active measures” can be understood and countered. Russia does not just pose a potential military threat to Britain, it says, but a broader information threat designed to “alter population perception” to create an “artificial reality” to benefit Russia.

The FCO proposed a budget of £20,000 ($26,375) to cover two specialists at a rate of £250 ($330) per day to identify Russian “active measures” and determine whether there is a “single playbook” from which they are orchestrated. The FCO expected a report detailing the results of the investigation, which would help them “neutralize” these so-called active measures.

This particular project was to be “undertaken outside direct government control to minimize the inevitable accusation of being part of an orchestrated state-sponsored active measure.“

As part of the latest dump, the leakers also posted what they said was one of many “strictly confidential reports” prepared for the FCO by British spies “who travel around the world” to “measure the capabilities of potential agents.” The partly redacted document appears to provide detailed information on a certain “media monitoring outfit,” the name and location of which are redacted. A “key figure” at the organization is named as David Schraven, a German journalist. The report about the monitoring group is broken down into information about its “general reputation,” its “corporate verification,” its “political exposure [to Russia],” its “issues with the authorities,” its “donors” and “potential conflicts of interest.”

According to his Twitter bio, Schraven works for Correctiv.org, which is listed in another leaked document as one of the German organizations countering disinformation in Europe – so it is possible that the entire redacted document is about Correctiv.

Foreign Office Minister Alan Duncan previously denied that government funding had gone specifically toward funding the II’s social media activities (including its attacks on Labour leader Jeremy Corbyn) – but the leaks have confirmed that the entire organization is a UK government-funded project – and growth of its social media profiles was singled out in previous documents as being crucial to its success. In a statement on the new leaks, the hackers said Duncan had “shamelessly lied” to MPs about the initiative.