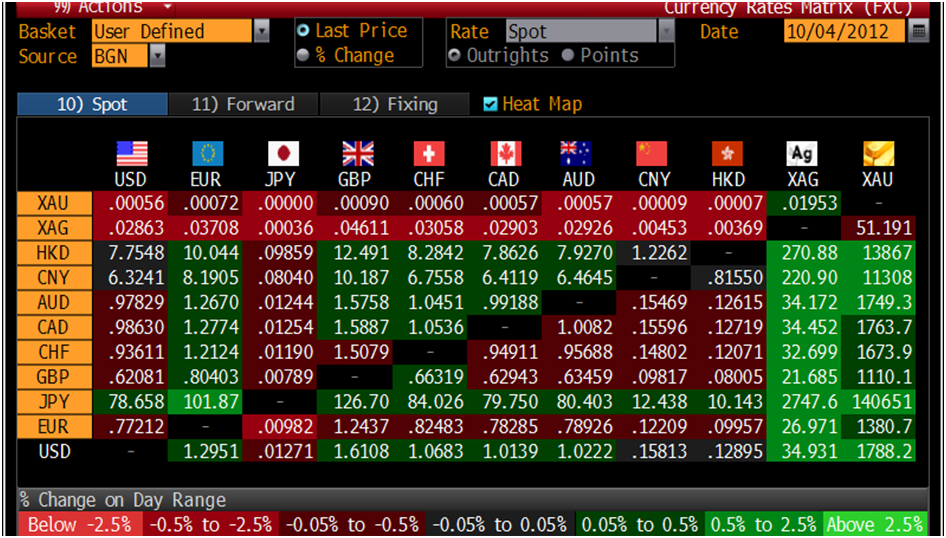 Gold inched up on Thursday, continuing its 4th day of gains as investors await more clues from central banks on further stimulus plans.

Today, The ECB has a rate decision at 1145 GMT and Bank of England at noon local time.

Investors will watch the key the nonfarm payrolls figure on Friday to determine if QE3 is beginning to stimulate the US economy.

China is actively taking steps to phase out the US dollar which will decrease volatility in oil and commodity prices and deride the ‘exorbitant privilege’ the USA commands as the issuer of the reserve currency at the centre of a post-war international financial architecture which is now failing.

In 1971, U.S. Treasury Secretary John Connally said, “It’s our currency and your problem”.

China is frustrated with what it sees as the US government’s mismanagement of the dollar, and is now actively promoting the cross-border use of its own currency, the yuan, or also called the renminbi, in trade and investment.

China’s goal is to decrease transactions costs for Chinese importers and exporters.

Zha Xiaogang, a researcher at the Shanghai Institutes for International Studies, said Beijing wants to see a better-balanced international monetary system consisting of at least the dollar, euro and yuan and perhaps other currencies such as the yen and the Indian rupee.

“The shortcomings of the current international monetary system pose a big threat to China’s economy,” he said. “With more alternatives, the margin for the U.S. would be greatly narrowed, which will certainly weaken the power basis of the U.S.”

Zha’s comments were highlighted at a seminar in Bahrain this week on the geopolitics of currencies organized by the International Institute for Strategic Studies, a London think tank.

GoldCore brought up these issues back in 2005. Rising economies of China, India and the Middle East are looking at trading options that do not include the greenback.

Not only the East but their financial ministry colleagues in the West are also questioning the current monetary order. Change is certainly around the corner.

At the Clinton Global Initiative last week Goldman Sachs CEO Lloyd Blankfein said that the US could risk its status as the world’s reserve currency if congress fails to act and the “fiscal cliff” program of tax increases and spending cuts is enacted January 1st.

If the US continues its trillion dollar deficits and does lose its reserve currency status what will a world without a reserve currency look like? That is what economists, think tanks and finance ministers are grappling over today.

John Williamson, one of the foremost academics on exchange rates, and a senior fellow at the Peterson Institute for International Economics in Washington examined the benefits of the US dollar’s reserve status.

He recognized two ways that US power is enhanced in the world economy by the greenback’s dominant role, which he doesn’t see challenged in the next 25 years.

First, the $3.2 trillion in official reserves that China has accumulated in maintaining the yuan’s semi-fixed peg to the dollar tie Beijing’s policy hands. That is because any hostile gesture, such as a threat to shift out of dollars, would destroy Chinese wealth.

Second, because of the extensive private use of the dollar globally, the United States is better able to enforce a financial embargo such as the one now directed against Iran.

China also faces risks including foreigners reinvesting their yuan back into China’s security markets. Such inflows may alter exchange rates and interest rates and would weaken the Communist Party’s grasp on their economy which would create an unpredictability that is against the iron rule it enjoys.

Currency wars are not new and often rising economies show their resentment of incumbents, notably the USA, who they view as printing money first and worrying about the effect on the global economy later.

Surjit Bhalla, Indian economist and author of “Devaluing to Prosperity” feels the massive undervaluation of the yuan was a major reason for China’s meteoric rise and the deep economic imbalances that led to the 1997/98 Asian financial crisis and the 2008 global crash.

He sees little merit in greater international use of the yuan but expects Beijing to push up its real exchange rate by 3-5% a year in order to help lift private consumption to at least 50 percent of national output over time from around just 35 percent now.

“This will be one of the most remarkable win-win situations of recent times,” said Bhalla, chairman of Oxus Investments, a New Delhi hedge fund. “Currency peace is breaking out. There have been currency wars, but now is time to enjoy the peace.”