The 45-year “War on Drugs” has drastically increased the US prison population, swallowed up trillions of dollars and claimed hundreds of thousands of lives across Central and South America, while coming no closer to stamping out dangerous narcotics.

President Richard Nixon declared a war on drugs in 1971, calling drug abuse “America’s public enemy number one” and citing addiction rates of US troops returning from the Vietnam War. The Drug Enforcement Administration (DEA) was created in 1973. Since then, the drug war has seen covert and overt US interventions in places ranging from Mexico to Colombia, including the 1989 invasion of Panama.

In the US, the drug war translated into skyrocketing incarceration rates. South of the border, however, it has been a real war, leaving a trail of devastation, corruption, impunity and death. For example, Mexico’s own drug war, launched in 2006 with US backing, resulted in at least 120,000 deaths by 2013.

The enemy is us

“Our government is more addicted to drug money than they are to drugs now,” Celerino Castillo, former DEA agent turned whistleblower, told RT. “If we worked to stop drug trafficking today, our banking system would collapse.”

In just one example, US law enforcement allowed over 2,000 weapons to reach the Mexican drug cartels, in a covert operation – dubbed “Fast and Furious” – intended to catch drug lords. Only a third of the weapons were ever recovered, however.

“When I found out about it, the fact that our country was complicit in sleeping with the enemy, I was in denial,” Castillo said. “At the end of the day, I found out that we were the enemy.”

He accuses Washington of cutting deals with the Colombian cartels – including the kingpin, Pablo Escobar, killed by Colombian authorities in 1993 – that allowed the production and importation of cocaine and enabled the 1980s crack epidemic.

Mexico and its Central American neighbors continue to see record homicide rates and corruption associated with the drug war. While the US government is starting to reform drug sentencing laws and drug policies, the 45-year drug war shows no signs of ending any time soon.

“The drug war itself is just an umbrella for this horrible cocktail of disaster that’s happening in Latin America,” RT correspondent Manuel Rapalo said, citing the experience of Honduras, where drug cartels used the 2009 US-backed coup to capture local governments and other public offices.

“The end result is impunity, corruption, record homicide rates. Honduras and El Salvador have the highest homicide rate outside of a war zone in the entire world. These are all issues directly related to the drug war,” Rapalo said.

In addition to the direct casualties, the policies driving the “War on Drugs” have a more far-reaching effect – one that weakens civil government institutions, leading to systematic human rights abuses.

One of the most notable examples is the case of 43 student protesters from the Ayotzinapa Rural Teachers’ College in Iguala, Mexico, who disappeared on September 26, 2014. According to the Mexican government, the students were killed by the local crime syndicate, “Guerreros Unidos,” and their remains were burned at a local garbage dump.

An independent probe by the Inter-American Commission on Human Rights, however, pointed to a possible cover-up by the local authorities, and even complicity by the Mexican federal government in the students’ disappearance. 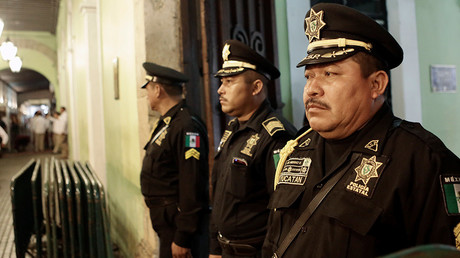 “It’s truly shocking the scale of human rights violations that are going on, but because of the continued impunity and continued reluctance of the international community to take action, this is the state that we are witnessing right now,” human rights attorney Azadeh Shahshahani, told RT.

Many human rights advocates are calling for the end to the US financing of the Merida Initiative, a bilateral agreement between the US and Mexico on drug trafficking, organized crime, and money laundering. Critics say the initiative only serves to codify human rights abuses.

“Just since 2008, the US has provided upwards of 2.5 billion dollars aid to Mexico in military and various other types of aid through the Merida initiative and other programs,” said Shahshahani, legal and advocacy director of Project South. “We believe that the aid needs to be totally suspended, in light of all the various forms of human rights violations against migrants, students, teachers, indigenous communities, activists and dissidents that we have documented, and the evidence and testimony that was presented to us.”

More than a year after the students were reported missing, some of the parents still hope to see them again.

“If my son or any of his classmates sees this message or video, I want to tell you that you’re not alone, that we’re looking for you,” said Antonio Tizapa, father of one of the students. “It’s not only the 43 families, but thousands and thousands of people are looking for you. And we’re demanding from the Mexican government to return you to us.”