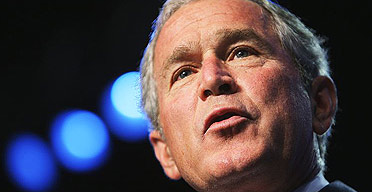 George Bush yesterday ramped up the war of words between the US and Iran, accusing Tehran of threatening to place the Middle East under the shadow of a nuclear holocaust and revealing that he had authorised US military commanders in Iraq to “confront Tehran’s murderous activities”.In a speech designed to shore up US public opinion behind his unpopular strategy in Iraq, the president reserved his strongest words for the regime of Mahmoud Ahmadinejad, which he accused of openly supporting violent forces within Iraq. Iran, he said, was responsible for training extremist Shia factions in Iraq, supplying them with weapons, including sophisticated roadside bombs. Iran has denied all these accusations.

Mr Bush referred specifically to 240mm rockets which he said were made in Iran this year and smuggled into Iraq.

“Iran has long been a source of trouble in the region,” he said.” Iran’s active pursuit of technology that could lead to nuclear weapons threatens to put a region already known for instability and violence under the shadow of a nuclear holocaust.”

The blunt terms in which Mr Bush portrayed the Iranian threat, and his threat of military confrontation with Tehran involving US troops based in Iraq, elevated the tense standoff between Washington and Tehran to a new level.

The speech also contained the implicit desire on Mr Bush’s part for regime change, calling for “an Iran whose government is accountable to its people, instead of to leaders who promote terror and pursue the technology that could be used to develop nuclear weapons”.

Equally menacing words emanated from Tehran yesterday, where Mr Ahmadinejad said US influence in the region was collapsing so fast that a power vacuum would soon be created. “Of course, we are prepared to fill the gap,” he said.

Though the Iranian president said he backed the leadership of the Iraqi prime minister, Nuri al-Maliki, and welcomed the involvement of Saudi Arabia, his offer to occupy the space the Americans might leave behind is unlikely to cool emotions in Washington.

He went on to deride the possibility of the US pursuing military action in Iran, saying it was in no position to do so and claimed that Iran had already acquired enriched nuclear fuels, though they would only be used for peaceful purposes.

In a further cause of tension, Mr Bush accused the Quds force within Iran’s revolutionary guards of leading the supply chain to Iraqi extremist groups. As the Guardian revealed earlier this month, the Bush administration is preparing to declare the 125,000-strong Revolutionary Guard Corps a “global terrorist organisation” – a move that would be seen as provocative within Tehran.

According to reports from Baghdad last night, a group of Iranians were detained last night in a raid by US troops on a hotel in the city. Of 10 people arrested, seven were said to be Iranian, including an employee of the Iranian embassy and six members of Iran’s electricity ministry in Iraq to discuss contracts for electric power stations. It was not immediately clear why the men had been arrested, or where they had been taken. The US military would only say the action was part of an on-going operation.

Mr Bush’s bullish talk of his determination to “take the fight to the enemy” in the carefully choreographed setting of a veterans’ convention in Reno, Nevada, was the second of a two-part appeal by him to shore up public support for his flagging strategy on Iraq. In the first speech, made last week, he invoked Vietnam to argue that quitting Iraq now could put the lives of millions of innocent civilians at risk.

Mr Bush yesterday vowed to persevere with his controversial military policy in Iraq, insisting that political and security progress was being made, despite a rising tide of dissent even from high up within his Republican party.

“Our strategy is this: every day we work to protect the American people. We will fight them over there so that we don’t have to fight them in the United States of America,” he said.

The twin speeches were intended as preparation for a crucial series of debates on Iraq that will dominate Washington for the next few weeks.

In a fortnight the senior general in Iraq, General David Petraeus, and American ambassador in Iraq, Ryan Crocker, will give two days of testimony in which they are likely to argue that the troop “surge” is having some beneficial impact on security levels, though political progress lags behind.

As the climax of these intense hearings, Mr Bush himself will present his latest assessment.

Yesterday’s speech was the latest clear indication that he will resist any attempt to change course in the prosecution of the war.

Mr Bush’s latest attempt to reassure the American people that the war is moving in the right direction came on another tumultuous day in Iraq.

Hundreds of thousands of pilgrims attending a Shia festival in Kerbala, 68 miles south-west of Baghdad, were ordered to leave the city after intense fighting broke out, reportedly between warring Shia factions. At least 52 people have been killed since Monday, mostly police officers engaging in the battle.