Royal Navy personnel seized at gunpoint by Iran in the Gulf have admitted being in the country’s waters, an Iranian general has claimed.

Gen Ali Reza Afshar told Iranian media the 15 personnel were being interrogated, but were in good health. 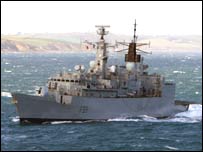 The Foreign Office could not say where the group was being held. It insists they had not been in Iranian waters.

Earlier, minister Lord Triesman met with the Iranian ambassador in London to demand their immediate release.

In the hour-long meeting, Lord Triesman also sought assurances about the group’s welfare and asked that they are seen by consular staff.

Britain’s UN ambassador, Sir Emyr Jones Parry, told BBC World TV that he had hoped to raise the matter with Iran’s foreign minister at the UN on Saturday, but was prevented by the Security Council’s debate over Iran’s nuclear programme.

Sir Emyr said: “I would have wished very much to have had the opportunity to approach the foreign minister and simply ask for the release of those sailors.

“Unfortunately, he allowed the debate to continue for 90 minutes before he joined us. He then assailed us for 40 minutes and then left before anyone else, and was shepherded out of the building.”

Iran’s Fars news agency earlier said the group of sailors, which includes one woman, was flown to Tehran, arriving in the capital at 1200 local time (0830 GMT).

But that report was later withdrawn from the agency’s website.

Meanwhile, the German presidency of the European Union has demanded the immediate release of the personnel.

The 15 were seized on Friday after boarding a boat in the Gulf.

They were from HMS Cornwall, based in Plymouth – the flagship of the coalition-Iraqi force which patrols Iraqi territorial waters in the northern Gulf to combat smuggling.

They had inspected an Iraqi boat before returning to their two small boats where they were seized before being moved along the Shatt al-Arab waterway to Iranian bases.

The British task force commander, Commodore Nick Lambert, said there had been no evidence of fighting.

Sir Alan was first sea lord in 2004 when Iran detained eight British servicemen for three days after they allegedly strayed over the maritime border.

The men were paraded blindfolded and made to apologise on Iranian TV before their release was agreed.

Sir Alan told BBC News that tracking systems then had proven that the servicemen had been in Iraqi waters.

“They can do lots of smokescreens and things like that but I am absolutely clear in my mind it would have been in our waters,” he said.

The Ministry of Defence has been in contact with relatives of the group.

The seizure follows claims that much of the violence against UK forces in Basra is being engineered by Iranian elements, which Tehran denies.