Police departments across the US could lose public funding if cops don’t avoid taking all steps possible before using their firearms. New restrictions will have to be introduced for the funding to stay intact under a new Democrat-proposed bill.

The bill will be introduced to the House of Representatives on Thursday by Wisconsin Congresswoman Gwen Moore. She wishes to introduce fines for any police chiefs who would fail to follow through and introduce stricter regulations on appropriate gun use for their officers. This has to do in particular with when to open fire on a suspect.

Gun use in the United States is a multifaceted issue; over the past couple of years it has, among other things, proven to reach across racial lines in a way that ignited nationwide movements against police brutality and wrongful shootings.

Moore’s proposal is a reaction to these developments, particularly the shooting death of Dontre Hamilton, who in April 2014 was killed in Milwaukee, Wisconsin. The man was a schizophrenic shot by a cop in self-defense. But it later emerged that the officer used an inappropriate pat-down, triggering an unpredictable nervous reaction.
Introducing her bill, ‘Preventing Tragedies Between Police and Communities Act of 2016’,   Moore said in a statement:

“As a mother, grandmother and elected representative, I personally took the untimely death of Dontre Hamilton to heart. Dontre wasn’t just my constituent, but a member of our community, yet sadly, his story is not unique,” she said.

“Too many young men and women in this country are unreasonably struck down by the very people who swore an oath to protect them. Too many mothers have been forced to bury their children and too many Americans have shared a fate similar to that of Dontre’s,” Moore continued.

“Upon hearing the news of this young man’s passing, I made a promise to myself and his mother, Maria Hamilton, that his death would not be in vain.”

According to a Guardian newspaper counter online, over 1,100 deaths happened in 2015. 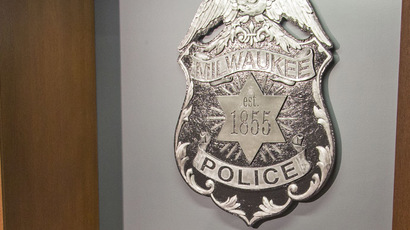 The problem with Moore’s proposal is the Republicans, who have strong influence in the House, and are pro-gun. After all, Moore’s is far from being the first gun-related proposal out there.

But the proposal is rather modest in nature, and only seeks to introduce preventive measures and tactics at de-escalation, which would be employed as an “affirmative duty… whenever possible.” It also seeks to train officers in using “the lowest level of force that is a possible and safe response to an identified threat.”

The training would involve skills in non-lethal force, as well as language skills and tactics aimed at easing tension, and crisis management techniques.

The punishment Moore proposes for chiefs who refuse to comply with the part of the law on “de-escalation training” is a 20 percent reduction in funding from the Department of Justice grant program, which donates $280 million annually to police departments across the US. Those chiefs refusing to implement the “affirmative duty” component would get a 15 percent reduction.