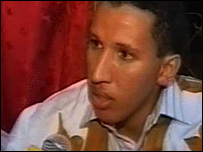 A Mauritanian man freed from the US military prison at Guantanamo Bay says he suffered “physical and psychological torture” during his years in jail.

Mohamed Lemine Ould Sidi Mohamed spoke to the media as he was welcomed back to his family home by his mother.

He described how US guards forced prisoners to watch them “urinating on the Koran”, AFP news agency reports.

Mr Mohamed was arrested in 2002 in Pakistan. He told AP news agency he had never had any connection to al-Qaeda.

He was released without charge by a US tribunal and arrived back in Mauritania last week where the authorities questioned him for several days.

“Other prisoners, simple innocent Muslims were also tortured, humiliated in their beliefs and their human dignity,” AFP news agency quotes him as saying about his experiences.

“After that [the desecration of the Koran] we decided to no longer take it to our cells and only recited from memory,” he said.

Mr Mohamed, who is reported to be in his mid 20s, told AP news agency that he was “subjected to forced feeding after the hunger strike” demanding “justice or liberty”.

Correspondents say two other Mauritanians remain in custody in Guantanamo Bay alongside more than 300 detainees.

The US set the camp up in 2002 to hold foreign terror suspects captured during the war against the Taleban and al-Qaeda in Afghanistan.