Britain’s ban on female personnel serving in combat roles in the military appears set to be lifted following a detailed study.

Prime Minister David Cameron confirmed the “major step” at a NATO conference in Warsaw, Poland, on Friday. The shift would be phased, with combat roles gradually opening up in combat units such as the infantry, cavalry and special forces.

The Army’s own research, however, suggests that of the 7,000 women in the Army only 5 percent would meet the physical standards for a combat role.

In 2015 Cameron said: “We’ve already lifted a number of barriers in our armed forces with the introduction of female submariners and women reaching the highest ranks in all services.

“We should finish the job next year and open up ground combat roles to women,” he added. 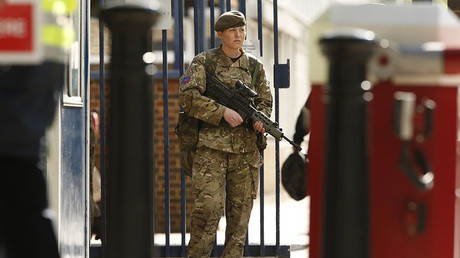 However, the ambition of introducing women to combat roles met considerable resistance among some of the military’s traditionalists.

Colonel Richard Kemp, a right-wing commentator who once called the Israeli Defense Force (IDF) the “most moral army in the world,” attacked the initiative in a Telegraph comment piece in April 2016.

First he rounded on those who support the scheme, accusing them of “feminist zealotry,” while hinting women are too cowardly to fight.

“The people who have demanded this change – politicians desperate to be seen as ‘progressive,’ feminist zealots and ideologues hell-bent on equality of opportunity without exception – would never dream of volunteering,” he raged.

On the whole, women are simply not strong enough to carry out an infantry role due to the high physical demands of combat, he argued.

Kemp predicted many British soldiers would resign because “every infantryman knows that the price for this social engineering experiment will be paid in blood.”