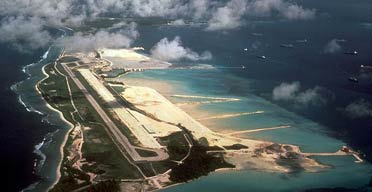 Allegations that the CIA held al-Qaida suspects for interrogation at a secret prison on sovereign British territory are to be investigated by MPs, the Guardian has learned. The all-party foreign affairs committee is to examine long-standing suspicions that the agency has operated one of its so-called “black site” prisons on Diego Garcia, the British overseas territory in the Indian Ocean that is home to a large US military base.Lawyers from Reprieve, a legal charity that represents a number of detainees at GuantÃ¡namo Bay, including several former British residents, are calling on the committee to question US and British officials about the allegations. According to the organisation’s submission to the committee, the UK government is “potentially systematically complicit in the most serious crimes against humanity of disappearance, torture and prolonged incommunicado detention”.

Clive Stafford Smith, the charity’s legal director, said he was “absolutely and categorically certain” that prisoners have been held on the island. “If the foreign affairs committee approaches this thoroughly, they will get to the bottom of it,” he said.

Andrew Tyrie, Tory MP for Chichester and a campaigner against the CIA’s use of detention without trial, has also urged the committee to investigate. He said: “Time and time again the UK government has relied on US assurances on this issue, refusing to examine the truth of these allegations for themselves. It is high time our government took its head out of the sand and looked into these allegations.”

A member of the foreign affairs committee said the committee would pursue the allegations as part of its inquiry into Britain’s overseas territories. Although Diego Garcia is part of the British Indian Ocean Territory, it is unclear whether the British government knows whether the CIA has detained prisoners there or not.

UK officials are known to have questioned their American counterparts about the allegation several times over a period of more than three years, most recently last month. Whenever MPs have attempted to press ministers in the Commons, they have met with the same response: that the US authorities “have repeatedly given us assurances” that no terrorism suspects have been held there.

The existence of the CIA’s black site prisons was acknowledged by President George Bush in September last year. He said al-Qaida suspects or members of the Taliban who “withhold information that could save American lives” have been taken “to an environment where they can be held secretly, questioned by experts”.

Mr Bush did not disclose the location of any prison, but suspicion that one may have been located on Diego Garcia, some 1,000 miles off Sri Lanka’s southern coast, has been building for years. The 2,000 islanders were expelled in the early 1970s after the British government struck a secret deal to lease the 37-mile long island to the US for use as an air and naval base. Any evidence uncovered by the foreign affairs committee pointing to the existence of a secret CIA prison on the island would be hugely embarrassing for ministers.

Barry McCaffrey, a retired four-star US general who is professor of international security studies at the West Point military academy, has twice spoken publicly about the use of Diego Garcia to detain suspects. In May 2004 he said: “We’re probably holding around 3,000 people, you know, Bagram air field, Diego Garcia, GuantÃ¡namo, 16 camps throughout Iraq.” In December last year he repeated the claim: “They’re behind bars…we’ve got them on Diego Garcia, in Bagram air field, in GuantÃ¡namo.”

MPs on the committee may inquire into a Gulfstream executive jet which has been linked by its registration number to several CIA prisoner operations – known as extraordinary renditions – and which flew from Washington to Diego Garcia, via Athens, on September 11 2002, soon after the capture of Ramzi Binalshibh, a suspected planner of the September 11 attacks the previous year.

A prison of some sort is known to exist on Diego Garcia: in 1984, a review by the US government’s general accounting office of construction work on the island reported that a “detention facility” had been completed the previous December. British ministers have also disclosed that a building on the island was redesignated as a prison after the September 11 attacks.

Last June Dick Marty, a Swiss senator who investigated the CIA’s use of European territory and air space during prisoner operations, concluded in a report to the Council of Europe that prisoners had been held on the island.

Mr Marty, who later told the European parliament that he had received help from senior CIA officers, reported: “We have received concurring confirmations that United States agencies have used Diego Garcia, which is the international legal responsibility of the UK, in the ‘processing’ of high-value detainees.”

One possibility which the foreign affairs committee may explore is that suspects have been held on a prison ship off the coast of Diego Garcia. The UN special rapporteur on torture, Manfred Nowak, has said that he has heard from reliable sources that the US has held prisoners on ships in the Indian Ocean. There have also been second-hand accounts from detainees at GuantÃ¡namo of prisoners being held on US naval vessels.

· Diego Garcia is a 37-mile-long coral island surrounding a lagoon in the Indian Ocean, the largest such atoll in the Chagos archipelago. Discovered by the Portuguese in the 16th century, it remained uninhabited until French coconut planters shipped in slave labour 200 years later.

· Ceded to Britain after the Napoleonic wars, the archipelago was a dependency of Mauritius until 1965, when it was detached, later becoming the British Indian Ocean Territories, sovereign British territory.

· Over the next eight years the 2,000 inhabitants were forcibly removed, first to the Seychelles and then to Mauritius, where many remain economically marginalised. The atoll was leased to the US military and it later emerged that Washington made a series of secret payments, including a reported £14m discount on the Polaris nuclear missile system.

· A 50-strong group of UK military personnel act as customs officers, police and wildlife guardians, and their commanding officer is coroner. But this group is dwarfed by around 3,200 Americans.

· The Chagos islanders won a battle in their campaign to return when the appeal court ruled last May that the right to go home was “one of the most fundamental liberties known to human beings”.