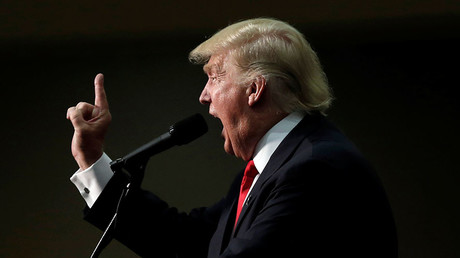 Republican Presidential candidate Donald Trump has blasted the state of US inner cities saying Americans would be safer walking through “war-torn countries” like Afghanistan than “being in the middle of some of our inner cities.”

Trump made the comments at a rally in Asheville, North Carolina, where a crowd of almost 10,000 gathered inside the US Cellular Center to hear him speak. In a brutal attack against the Democratic Party, who he claims has been controlling inner city areas for “a hundred years straight,” Trump said a “new agenda” was needed.

“The Democratic Party has run the inner cities for 50, 60, 70 years and even a hundred years straight,” he said, speaking to his supporters. “We are on a mission of change. That includes a new agenda for our inner cities.”

He mentioned that inner cities in the US have become “a mess,” while he accused Democratic politicians “like Clinton” of “taking these voters for granted.”

To rousing cheers from around the arena, he urged black voters to “give Donald Trump a chance,” adding that “you have nothing to lose, it can’t get any worse,” after citing poverty rates for African Americans living in inner city areas.

“It’s time to break with the bitter failures of the past and embrace a new American future,” he said. “That means great jobs, great schools and great neighborhoods, and it also means safety.”

This is not the first time that Trump has blasted the crime rates and safety levels in some of the country’s inner city areas. During a speech in August in the blue-collar city of Akron, Ohio, he said that “in war-zones in countries that we are fighting… it is safer than living in some of our inner cities that are run by the Democrats.”

Trump also said that if elected, he will help to make US cities safe again.