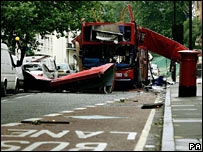 Survivors of the 7 July London bombings have threatened legal action over the government’s refusal to grant an independent public inquiry. A group of survivors and relatives of those killed have handed a letter into the Home Office.

This document outlines the group’s intention to pursue a Judicial Review if the government does not allow a public inquiry to be held.

The group of survivors and relatives of the dead have said they would prefer not to pursue a formal judicial challenge and incur potentially costly litigation.

But James Oury, senior partner of Oury Clark Solicitors, said because the former Home Secretary, Dr John Reid, refused their request earlier this year to grant an independent public inquiry, they had been forced to consider this legal challenge.

Mr Oury said: “There is continued uncertainty over the events leading up to the attacks on 7 July 2005 and an independent inquiry is seen as an appropriate way to address this concern.

“Our clients have endured unimaginable suffering in physical and emotional terms and it is unfair and inappropriate for the government to force our clients into an adversarial, costly and complex court setting – a litigation corner”.

The group say that the Intelligence and Scrutiny Committee report published by government into the bombings is ‘imperfect’.

They also say they do not accept that any of the investigations or reports carried out so far sufficiently comply with the government’s obligation to protect life.