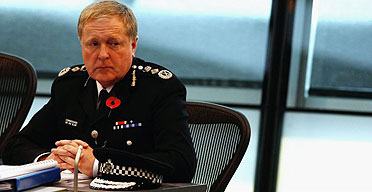 The Metropolitan police commissioner, Sir Ian Blair, today defied fresh calls for him to quit from members of the London assembly.Sir Ian insisted he would stay and “get on with the job” unless he lost the support of the government and his senior officers.

The demands for him to go came less than a week after his force was convicted of a series of “catastrophic errors” leading to the shooting of the innocent Brazilian Jean Charles de Menezes at Stockwell underground station, in south London.

Sir Ian told London assembly members that the force would not be appealing against the verdict in last week’s trial.

Holding up a copy of the Stockwell One report, to be published tomorrow, he said it did not contain any recommendations for the force.

The commissioner added that the Met had had a copy of the report for 18 months and had already revised many of its operational, surveillance and firearms procedures accordingly.

“I don’t think the report, when it is published, will say anything new that is not already public,” he said. “I hope it will draw a line under this and we will be able to show what we have done and can move on.”

Sir Ian said the six recommendations of the Stockwell Two report into the Met’s handling of public statements following the shooting had been implemented.

Of the 15 recommendations in the Stockwell 1B report, which dealt with the long-term repercussions, 14 were directed at a national level, Sir Ian said.

Sir Ian was then questioned by members at the meeting, which is being broadcast online.

The commissioner accepted “an obvious mistake” had been made in the killing of De Menezes, but insisted that “there are times when no one is culpable”.

He again said he did not believe he should resign unless systemic and repeated failures were found in the Met. “Everybody that day was doing the best they could to save Londoners’ lives,” he said.

Sir Ian also shed light on one of the trial’s key questions – why it had taken more than four hours for a specialist firearms team to arrive at Scotia Road, in Tulse Hill, south London, where De Menezes lived in the same block of flats as a terror suspect.

“We have only a limited number of specialist firearms teams available [which are covert] … if we had put it in Scotia Road, it would not have been available anywhere else,” he told the assembly.

He said the police were constantly balancing the “acceptable risks” to the public, themselves and suspects in their operations.

Last night senior Labour, Liberal Democrats and Conservatives all told the Guardian that he would lose a vote of confidence.

The Liberal Democrats and Tories have decided to vote together against the commissioner. Together, they have 14 out of the 25 assembly seats, with seven being held by Labour, which backs Sir Ian.

Last Thursday, the Met was convicted of breaching health and safety laws and failing in its duty of care to 27-year-old De Menezes, who was shot dead in July 2005.

Today’s assembly meeting comes just 24 hours before the publication of an official Independent Police Complaints Commission report, which is expected to be highly critical of the Met over the shooting.

He has the public support of Downing Street and the Home Office, and close allies are watching closely to see whether that backing withstands what is expected to be another tough 48 hours for him.

The assembly vote will put pressure on the Metropolitan police authority, which is expected to hold an emergency meeting about Sir Ian’s future within the next fortnight. It and the Home Office have the formal power to remove the commissioner.

Despite Sir Ian’s hopes of drawing a line under the shooting after Stockwell One is published, an inquest due to take place next year will look into why the firearms officers pulled the trigger.

The Met could also face a private prosecution by the De Menezes family.