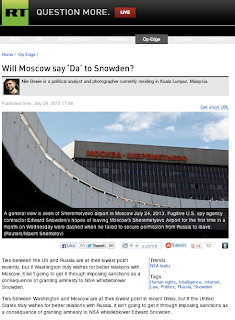 Ties between Washington and Moscow are at their lowest point in recent times, but if the United States truly wishes for better relations with Russia, it isn’t going to get it through imposing sanctions as a consequence of granting amnesty to NSA whistleblower Edward Snowden.

The US Senate has passed a bill authored by hawkish Senator Lindsey Graham that will enable Washington to move towards sanctioning countries that are seen as “aiding” Snowden. The message being sent is clear — American authorities are dead set on getting their “fugitive” and they are even willing to take the unprecedented move to impose sanctions on other countries for their failure to extradite a US citizen. Such a move completely undermines an individual’s right of asylum as specified by international law, and is a deeply hypocritical stance for a country that loves to posture itself as an arbiter of righteousness and a haven for asylum seekers and dissidents. During his speech to the Senate Appropriations Committee, Graham went on an anti-Russian tirade and made clear Putin’s administration will be in the thick of the proposed sanctioning effort. Such is the folly of US policy, which aims to get others to comply with little in return, or face punishment of sanctions. To add insult to injury, Moscow knows that the US would never concede to the demands it is currently placing on Russia if the tables were turned.