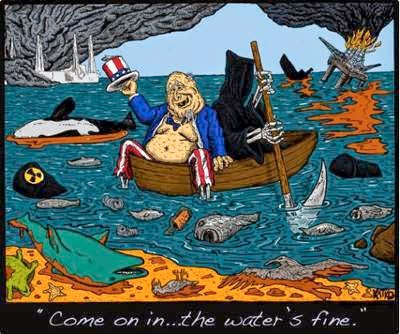 When experts start speaking in terms of “extinction events,” and uses terminology which includes “epidemic of historic magnitude,” and talks of threats that will “decimate entire population” of species,” then people better start paying attention.

If those terms don’t terrify you then the term from those same experts “we don’t have a clue,” should truly send chills up and down your spine.

These are what the experts are saying in regards to “mysterious” death of starfish and the “wasting syndrome,” yet since this is along the west coast and radioactive water has been dumped into the Pacific Ocean for over three years from the crippled Fukushima nuclear plant in Japan, it seems as if no one wants to make the connection that is the most obvious.

Oregon St. University, June 4, 2014: Sea star disease epidemic surges in Oregon, local extinctions expected – Just in the past two weeks, the incidence of sea star wasting syndrome has exploded along the Oregon Coast and created an epidemic of historic magnitude, one that threatens to decimate the entire population of purple ochre sea stars. […] its loss could disrupt the entire marine intertidal ecosystem. […] the sudden increase in Oregon has been extraordinary. […] less than 1 percent of the ochre sea stars in Oregon were affected in April, and only slightly more than that by mid-May. Today, [it’s] an estimated 30-50 percent [with some areas at] 60 percent […] Researchers project that the epidemic will intensify and, at some sites, nearly 100 percent of the ochre sea stars could die. “This is an unprecedented event,” said Bruce Menge […] Professor of Marine Biology […] “We’ve never seen anything of this magnitude before […] We have no clue what’s causing this epidemic, how severe the damage might be […] It’s very serious.” […] [Prior] outbreaks were associated with warm-water conditions [but] the water temperatures in Oregon “are only at the high end of a normal range,” Menge said