Either the MSM is completely clueless or they think the general public is clueless, either way, the story of the  never before seen, once-in-a-lifetime event of hundreds of orcas, humpbacks and dolphins showing up on the West Coast for a seafood buffet because of the millions of anchovies in unheard of amounts gravitating to the West Coast, has people excited they say, while completely ignoring the ramifications of why the anchovies are there attracting the whales and dolphins.

Note- November 26, 2013, a report at Before It’s News by Live Free or Die asks “So, we know for a fact that all across the Pacific Ocean, it has turned into a death zone, with no signs of life for miles and miles. However, close to the shore, anchovies are still bountiful…has the California coast turned into a sort of ‘Noah’s Ark’ for the remaining creatures?”

Note- November 28, 2013, a report by me at Before it’s News and I quote “A question mark appears in the questions from the MSM about what could be causing such odd behaviors in the sea creatures in the Pacific ocean when they ask, could it be Fukushima? You think??????”

My reference was to CBC actually asking if it could be Fukushima.

Seems other news outlets like CBS and ABC, both shown in video reports below, are still playing dumb and talking about how amazing this spectacular sight is of all thise sea creatures and pelicans coming to the West Coast for a seafood buffet is.

CBS News: 100s of whales in bay on California coast; It’s never been like this, we just can’t even believe it – Experts: We just aren’t sure what’s going on; “A once-in-a-lifetime chance… unheard of, it’s unbelievable, nobody’s seen this”

Look at some of the quotes:

Exactly why we are seeing these incredible numbers of anchovies isn’t completely clear. There are some ideas that surface, perhaps the warmer water in the bay is more conducive to anchovy egg and larval survival right now, and the fish know that. But we aren’t sure

“This is a once-in-a-lifetime chance, so people should see it.”
“It’s never been like this” she said. “This is phenomenal.”
“They are chasing an unexplained explosion of anchovies in the bay.”
“So I’m just trying to tell the people how lucky they are to really witness this.”

The Pacific is dying, the animals are all trying to get to the safest place possible and the idiots quoted above are excited?

It is unhead of, never before seen and all the other descriptions because it is NOT normal, the animals are not there some “unknown” reason and the MSM damn well knows it. 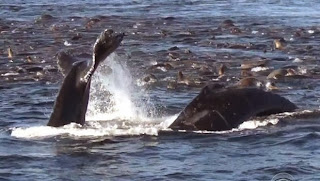