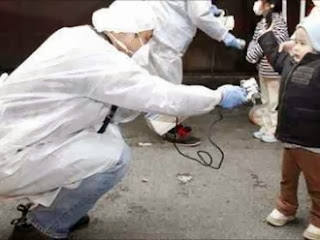 Nearly three years later, TEPCO finally admits “We should have shared the finding with the public in the belief it would help promote universal safety, but failed to do so.”

According to a Dec. 13 report by the operator of the crippled facility, water was pumped in sufficient quantity to avert core meltdowns in the No. 1, No. 2 and No. 3 reactors, but much of it strayed into irrelevant pipes and ended up elsewhere.

The Truth – (Or at least what they admit to now)

…..But the water failed to cool it and the other reactors efficiently, and could not stop the core meltdowns in the No. 1, No. 2 and No. 3 reactors.

Via ENENews, this portion of their headline should be duly noted “Experts: Fukushima cesium release could be more than triple Chernobyl.”

Estimate of Consequences from the Fukushima Disaster – Presentation downloadable

TEPCO has been lying from day one… they admit it. if this is now coming to light, with their history of lies and downplaying events and global ramifications, one has to wonder how much worse it actually is than what they are now acknowledging.