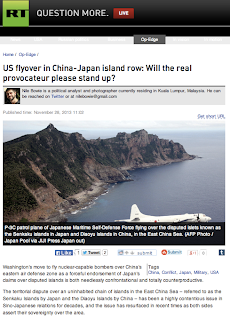 Washington’s move to fly nuclear-capable bombers over China’s eastern air defense zone as a forceful endorsement of Japan’s claims over disputed islands is both needlessly confrontational and totally counterproductive.

The territorial dispute over an uninhabited chain of islands in the East China Sea — referred to as the Senkaku Islands by Japan and the Diaoyu Islands by China — has been a highly contentious issue in Sino-Japanese relations for decades, and the issue has resurfaced in recent times as both sides assert their sovereignty over the area.

Mass protests were seen in China targeting Japan’s embassy and Japanese products, shops and restaurants when Tokyo’s far-right former Governor Shintaro Ishihara called on Japan to use public money to buy the islands from private Japanese owners in 2012.

The issue stirs passions in Chinese society because Tokyo’s claims are seen as an extension of the brutal legacy of the Japanese occupation and a direct challenge to strong historical evidence that has legitimized Chinese sovereignty over the area since ancient times.

Moreover, the official stance of the government in Beijing is that Japan’s invalid claims over the islands were facilitated and legitimized by a backdoor-deal between Tokyo and Washington that directly challenges international law and post-World War II international treaties.