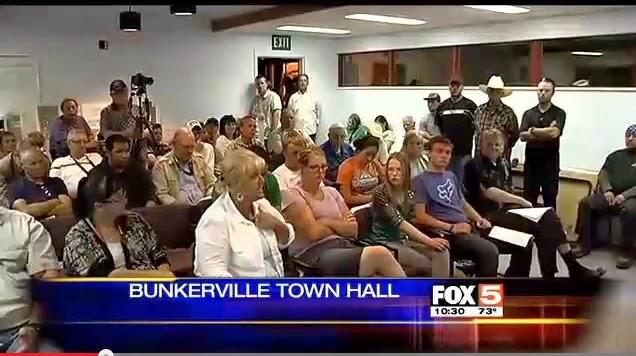 Despite outright lies by a puppet for Harry Reid when congressman Steven Horsford claimed Bunkerville, Nevada residents were “scared” and felt threatened by the militia members that came from across the US to protect them along with Cliven Bundy, his family and Bundy supporters, from the Bureau of Land Management, the town residents are not only pushing back about those lies, but are sounding off about the BLM and how they felt safe again once the militia arrived to help. The very first woman heard at the town hall meeting shown in the video news report below says “The day the militia came, is the first day I felt safe again in Nevada.”

“I called Metro, and their exact words to me were, ‘It’s the BLM and Cliven Bundy’s problem,’ — and I should take it up with one of those two. There are my children and my community, and if Metro doesn’t have the guts to come out and protect us — what are you here for? What are we paying you guys for?” another resident said.

From another “I want to tell every one of them militia, thank you. Because not one of our government officials, not one of our sheriffs or Metro would have saved us that day. They didn’t save us that day”
The BLM wasn’t the only entity the residents and council members criticized, but the media’s spin on the whole affair took some hits as well, being lambasted for biased reporting and spinning the story for ratings rather than telling the truth.

The sheriff, Doug Gellespie also took some major flack in the meeting for being “AWOL”  while residents of the town were terrorized by federal authorities.