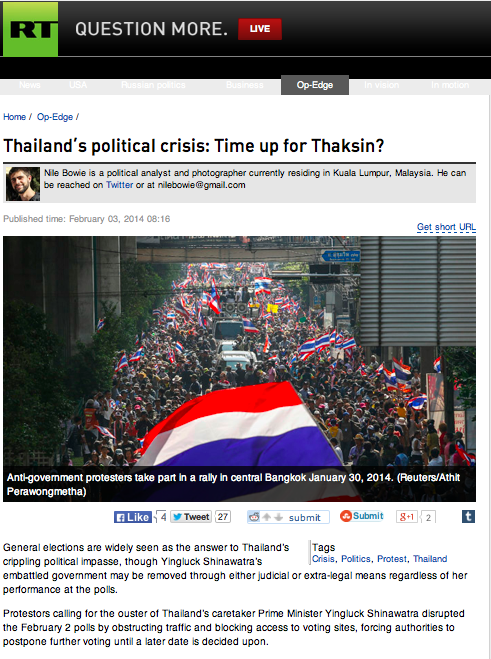 General elections are widely seen as the answer to Thailand’s crippling political impasse, though Yingluck Shinawatra’s embattled government may be removed through either judicial or extra-legal means regardless of her performance at the polls.

Protestors calling for the ouster of Thailand’s caretaker Prime Minister Yingluck Shinawatra disrupted the February 2 polls by obstructing traffic and blocking access to voting sites, forcing authorities to postpone further voting until a later date is decided upon.

Thailand has been marred by political upheaval since November, and the country’s two rival protest movements accuse each other of launching anonymous attacks on one another, usually by targeted shootings or by the use of small explosives, leaving several dead.

The consensus of independent analysts and others who have monitored the attacks suggest that they were mostly launched by government supporters, who have used insurgent tactics in the past to support the Shinawatra political clan.

Thai political movements have been characterized in recent times by color affiliations. Protestors wearing yellow shirts represent the faction aligned to the all-powerful Thai monarchy and the royal establishment that has traditionally wielded tremendous social, political and economic power over the country.