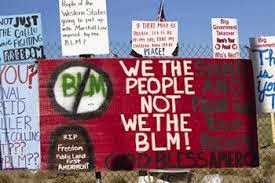 The Attorney General of Texas is not about to sit back and allow the Bureau of Land Management (BLM) to land grab 90,000 acres of Texas land and he has fired the first shot across the bow at the BLM, in the form of a demand letter for the BLM to justify arbitrary new legal positions that would allow them to steal Texas land from the hard working landowners in Texas.

He calls the letter, which will be embedded below, the first step in the legal process and also tells Breitbart he is prepared to hand a “Come And Take It” flag to tell the BLM to stay out of Texas.

“What Barack Obama’s BLM is doing,” Abbott continued, “is so out of bounds and so offensive that we should have quick and successful legal action if they dare attempt to tread on Texas land and take it from private property owners in this state.”

As to the timeline of how this matter moves forward Abbott explained that it is hard to tell how quickly or slowly the BLM might move on this matter. “One of the problems is, we can’t tell what they’re doing other than trying to operate in very suspicious ways. We want to make sure they are going to be open and transparent about what they are doing and that constitutional due process rights are going to be protected.”

Abbott told Breitbart Texas he wants to make sure the BLM understands that what they appear to be attempting to do is completely illegal. “This is Texas land. It belongs to Texas and the private property owners here,” Abbott firmly stated. “If we have to, we will assert quick and effective legal action to put a stop to it.”

The BLM’s actions in Nevada and the threat to Texas land has pushed the issue of the BLM’s arbitrary decisions, and highlighted the agency’s attacks against landowners, to the point where officials from nine states recently met at what is called the “The Legislative Summit on the Transfer of Public Lands,” to discuss taking state land back from the poor management by the BLM. The claim is this meeting was in the works for months.

It looks like states are preparing for a showdown with the BLM to take their lands back.

The Texas AG letter is embedded below.

Abbott Letter to BLM by BreitbartTexas