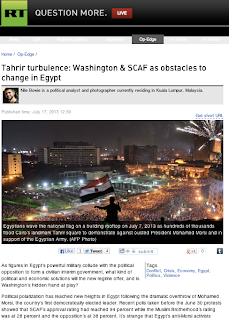 As figures in Egypt’s powerful military collude with the political opposition to form a civilian interim government, what kind of political and economic solutions will the new regime offer, and is Washington’s hidden hand at play?

Political polarization has reached new heights in Egypt following the dramatic overthrow of Mohamed Morsi, the country’s first democratically elected leader. Recent polls taken before the June 30 protests showed that SCAF’s approval rating had reached 94 percent while the Muslim Brotherhood’s rating was at 28 percent and the opposition’s at 38 percent. It’s strange that Egypt’s anti-Morsi activists would place their trust in SCAF given its extensive crackdown on civilian protesters since the revolution began, and certainly no one can deny that the Muslim Brotherhood was isolated during its final days. It is highly unlikely that Morsi would ever be reinstated at this point, and the interim government can be expected to pursue austerity measures, economic restructuring, and a foreign policy in step with Western-Gulf states. Morsi had something that the current rulers of Egypt do not — democratic legitimacy — and despite that only 34 percent of Egyptians took part in the vote, the result should have been respected by the military. Morsi was by no means a democrat, but the Muslim Brotherhood captured the majority in parliament, and their persecution and total exclusion from the interim government is unacceptable.

After sweeping away two presidents since 2011, the original goals of the revolution, embodied in the popular slogan “Bread, Freedom, Social Justice and Human Dignity,” haven’t come close to materializing. For all intents and purposes, life for the average Egyptian is more difficult now than under Hosni Mubarak, and although Morsi’s shortcomings may not have justified a military coup, his tenure was a spectacular failure. Although many perceive Morsi and Egypt’s Supreme Council of the Armed Forces (SCAF) as being hijackers of the 2011 revolution, the bottom line is that the revolutionary fervor emanating from Tahrir Square is not directed against one party or political figure, but against economic conditions and neo-liberal tendencies that have largely remained unchanged throughout the ebb and flow of Egyptian politics in recent times.