On June 6th of 2012, a massive explosion rocked northeastern Michigan for hundreds of square miles. The epicenter as mapped out according to reports of the blast on Facebook was the Alpena Combat Readiness Training Center, home of a new drone facility where the Air Force will be conducting R&D, manufacturing, pilot training, and presumably operational missions. The Air Force denies any knowledge of an explosion at the base. 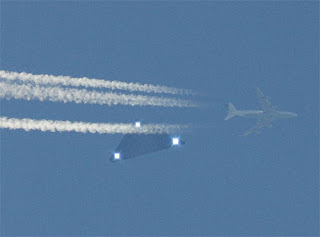 The ACRTC has been abuzz with all kinds of strange activity, with videos of sounds in the sky accompanied by lights, UFOs being videotaped over the base, harassment of citizens by black helicopters, and sightings of  foreign troops in town becoming more frequent.

Another blast a few weeks ago actually caused property damage, and in this episode of The Truth Is Viral host Bob Powell speaks with the homeowner, who lives right next to the base, about his experiences.

Northern Michigan is not alone when it comes to strange sounds and lights in the sky which are often accompanied by booming noises that are familiar to military veterans as high-explosive detonations. Activist Post writer Brandon Turbeville has written about explosions very similar to those described by residents in Michigan that he himself experienced in South Carolina late last year. Turbeville also relays his experiences in this program during an exclusive interview with The Truth Is Viral.

Strange sounds and booms are being heard and felt all over the world, most recently in Canada.

According to CBC News,
multiple residents in Terrace, British Columbia were awoken by a loud
whining noise which seemed to be falling down from the sky or rising
from deep below the earth’s surface.
“It seemed to be coming from the sky or
underground, something so loud though. And I believe it was heard in
Hazelton, which is close to here, and as far as the Nass,” said Mandi
Campbell, who heard the noises Thursday morning. (“Is There an Earthy Explanation to These Loud, Whining Noises Supposedly Coming From the Sky? – Or Are They Part of a Larger, Worldwide Phenomenon? ~  The Blaze.)
You can track these strange sounds at http://strangesounds.org/2013/05/strange-sounds-map-world-wide-reports-from-youtube-of-unexplained-noises-and-mysterious-booms.html