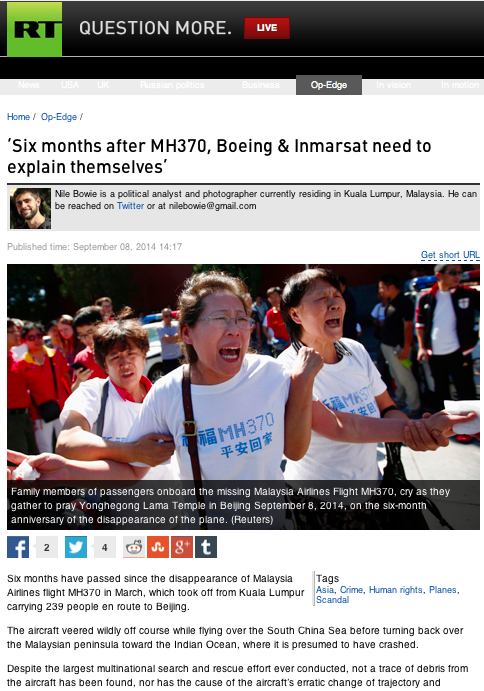 Six months have passed since the disappearance of Malaysia Airlines flight MH370 in March, which took off from Kuala Lumpur carrying 239 people en route to Beijing. The aircraft veered wildly off course while flying over the South China Sea before turning back over the Malaysian peninsula toward the Indian Ocean, where it is presumed to have crashed.

Despite the largest multinational search and rescue effort ever conducted, not a trace of debris from the aircraft has been found, nor has the cause of the aircraft’s erratic change of trajectory and disappearance been established. The case of MH370 has proven to be the most baffling incident in commercial aviation history and one of the world’s greatest aviation mysteries.

Malaysia Airlines has suffered the two worst disasters in modern aviation less than five months apart, following the tragic demise of flight MH17 in July, forcing the company to slash its staff numbers by a third as part of a major restructuring effort. The state has announced plans to take full ownership of the national carrier following the collapse of its share price and its subsequent removal from the stock market.

After a fruitless search in the southern Indian Ocean where the plane is believed to have ditched, investigators established a new search area that has been mapped by Chinese and Australian ships since June. The next stage of the investigation has been given a provisional 12 months, and a Dutch contractor, Fugro Survey, will conduct an underwater search beginning this month.

It is hoped that once the wreckage is discovered, the aircraft’s black boxes, cockpit voice recordings and flight data will help investigators explain the incident, as well as give closure to the families of the victims. There is still little consensus among investigators and experts as to what actually happened on board the doomed flight.