The “revolution” in Libya was anything but a popular uprising. The “protestors” that overthrew Moammar Gadaffi were in fact al-Qaeda terrorists that had been unleashed on the country by the CIA under the direction of Barack Hussein Obama, and I prove this in this latest episode of The Truth Is Viral.

Even more shockingly, you will hear an exclusive TTiV interview with a NATO spokesman who states, for the record, that the reason Obama had given for intervening in Libya was an utter lie. Obama had claimed that Gadaffi was about to use chemical weapons on the “protestors,” when in fact he had been dispossessed of any WMD capability as early as 2003. NATO not only knew this, they were the ones who had been helping Gadaffi get rid of those weapons. 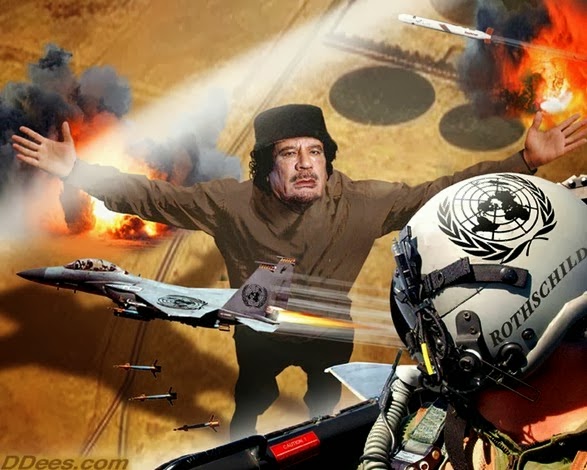 Barack Obama, however, is not one to let a few facts get in his way when it comes to implementing whatever evil agenda he wishes. Under orders from a cabal of international bankers Obama, who has been doing whatever he can to support radical Islamists across the Middle East, the CIA trained and equipped al-Qaeda terrorists and set them on a path of revolution that ended with a new Libyan Central Bank and the black flag of al-Qaeda flying over the Benghazi courthouse.

Assisted by NATO forces and Qatari Army Soldiers, and supplied with weapons by the Qataris, these al-Qaeda terrorists succeeded in removing the Libyan leader from power before brutally murdering him.

Now, the very same al-Qaeda terrorists Obama has been supporting since he lied during his first inauguration when he swore to support and defend the United States are tear-assing around Syria, wiping out entire Christian villages. Christians are being beheaded and crucified for their faith, their children forced to watch as the evil scum Obama loves so much use the heads of their parents as soccer balls before being dismembered and killed themselves.

And your tax dollars are supporting that horror.

Please share this episode of The Truth Is Viral in every way you can. Particularly, send it to every talking head you can think of at FOX news. At least they won’t have the excuse that they didn’t know. They know, believe me. We just have to let them know that WE know, hopefully shaming them into covering this story properly. Of course, since FOX News is more than 40% owned by the Saudi royal family (also sponsors of al-Qaeda,) that may be too much to hope for.

But we have to try.