When Barack Obama was at the Mile High Stadium, in Denver CO, accepting the DNC nomination for President in 2008, he had them build a replica of the Altar of Zeus at Pergamos from which he accepted the nomination. 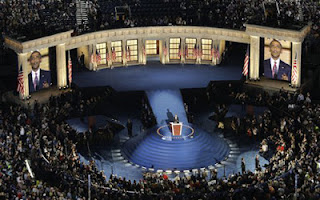 This past June, Obama once again appeared on the Altar of Zeus at the Brandenberg Gate when he visited Germany and gave a speech to a small crowd (most of whom actually had to be paid to attend.)

In this episode of The Truth Is Viral, author Steve Fletcher talks about how Obama’s affinity for portraying himself as a god (ever notice the halos around his head when he appears on magazine covers?), repeated visits to the Altar of Zeus, and other recent events point to Barack Obama being the Antichrist; including the Abomination of Desolation he says occurred when Obama set foot in the birthplace of Christ in Bethlehem (Obama was pretty rude if you watch the video of his visit.)

Here is just a handful of the compiled evidence to show Obama to be the Antichrist.

1. Obama made a COVENANT WITH MANY when he received the Nobel Peace Prize on October 9, 2009. This was not a prize, but a pre-payment on a promise to bring the peace they had been waiting for. He has broken the covenant just as Daniel 9:27 explains. He is a traitor, he is not a man of peace. Now, exactly 3.5 years later as the Bible predicts, they want their peace prize back.

2. The Abomination of Desolation according to Daniel and Jesus has been fulfilled, and is fully documented. Matt 24:15. This documentation shows confirmation on three levels.
a. The details of the Abomination event itself.
b. Confirmation from the timelines of Daniel going back to 1947 and the Order to Restore Jerusalem.
c. Characteristics of the Antichrist that are fulfilled in astounding fashion by Barack Obama.

3. This is a supporting video that if you have not seen you need to take the time to see it. The evidence is astronomical. THE SON OF PERDITION: BARACK HUSSEIN OBAMA https://www.youtube.com/watch?v=NdUkLtwl_hI

With everything that is happening in our world today, with all the signs we are seeing fulfilled every day of the closeness of Christ’s return, and right now WW3 about to break out in the Middle East… are you on fire for the Lord Jesus Christ, is your lamp full and are you ready for Christ’s Return?

What is happening now is just one more sign that indeed all things are coming together at once, the END TIME IS NOW, AND RAPTURE AND JUDGMENT ARE IMMINENT.

According to Fletcher, one of the major events to transpire proving that Barack Obama is the Antichrist was the Abomination of Desolation, which Fletcher claims took place on March 22nd 2013 when Barack Obama stood in the birthplace of Jesus Christ in Bethlehem.

The Abomination of Desolation is the last prophetic event that needs to be fulfilled before the Second Coming of Christ (there are no prerequisite events for the Rapture, which is a completely separate event), and Fletcher’s most recent research claims that Comet Ison is the “Sign of the coming of the Son of Man,” and that the Rapture is imminent.

Steve is careful not to set a date for the Rapture, only claiming that the comet is the “sign of His coming,” and that before the comet fades from view Christ will Rapture the faithful. Hopefully he will grant The Truth Is Viral another interview to talk about that.

In any case, please Lord, come soon and rescue us from the evil that has defiled your creation and murdered your children.

God bless and protect us all as we fight to save lives and win souls for Jesus Christ in these last days,
Bobby