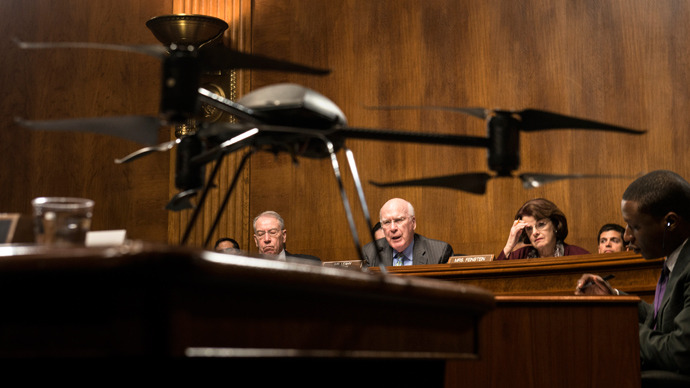 Pointing out that “surveillance is surveillance, whether carried out by government or the private sector,” John W. Whitehead, president of The Rutherford Institute, is calling on Sen. Dianne Feinstein (D-Calif.) to take the lead in ensuring that legislative safeguards are adopted to protect all Americans from threats to their privacy and civil liberties by drones, regardless of whether the drone operator is a private citizen, a commercial entity or a government agent. Whitehead’s letter to Sen. Feinstein, who serves as the head of the U.S. Senate Intelligence Committee, comes in the wake of expert testimony and remarks by Feinstein alleging that she may have been a target of surveillance by a privately operated micro-drone. Although Whitehead agrees with Feinstein that drones used by the government require close scrutiny, he noted that her requirement of a search warrant does not go far enough.

“Given the courts’ historic leniency towards police, predicating drone use on a warrant requirement would provide little protection for the average American,” warned Whitehead. “The only hope rests with Congress and state legislatures that they would ensure that Americans have a semblance of civil liberties protections against the drones.” In anticipation of at least 30,000 drones taking to the skies domestically by 2020, Rutherford Institute attorneys provided to state and local governments throughout the country model drone legislation to safeguard Americans’ privacy and civil liberties.

“Surveillance is surveillance, whether it is carried out by a commercial drone operator using an unmanned aerial vehicle or a government operative relying on sophisticated phone algorithms. As such, all Americans–not merely those who are in the public eye–have a right to be free of such invasions of their privacy and incursions on their Fourth Amendment rights,” said constitutional attorney John W. Whitehead, author of A Government of Wolves: The Emerging American Police State. “Although we are on the cusp of a technological revolution which will upend our concepts of society, freedom, justice and law, we have failed to establish any safeguards against future abuses. Drone technology is too powerful, too lethal and too indiscriminate for us to allow it to be unleashed on the American populace before any real protocols to protect our safety and privacy rights have been put in place.”

The FAA Reauthorization Act, signed into law by President Obama in 2012, authorized the use of drones domestically for a wide range of functions, both public and private, governmental and corporate. Yet as constitutional attorney John Whitehead points out, without proper safeguards, these drones, some of which are deceptively small and capable of videotaping the facial expressions of people on the ground from hundreds of feet in the air, will usher in a new age of surveillance in American society. Not even those indoors, in the privacy of their homes, will be safe from these aerial spies, which can be equipped with technology capable of peering through walls. In addition to their surveillance capabilities, drone manufacturers have confirmed that drones can also be equipped with automatic weapons, grenade launchers, tear gas, and tasers. Many local police departments throughout the country, including in Florida and California, have already begun utilizing drones in police procedures without any real regulations in place. The Rutherford Institute’s model drone legislation, which prohibits the federal government from using data recorded via surveillance drones in criminal prosecutions, in addition to prohibiting government agencies from utilizing drones outfitted with weapons and anti-personnel devices, whether lethal or non-lethal, was first adopted by Charlottesville, Va., in Feb. 2013.