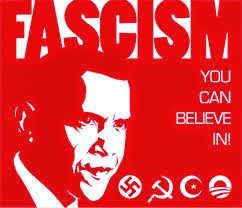 Fascism: a governmental system led by a dictator having complete power, forcibly suppressing opposition and criticism, regimenting all industry, commerce, etc., and emphasizing an aggressive nationalism and often racism. Actor and comedian Rob Schneider joins Chris Stigall and discusses the current state of America, where he asserts that “We are sliding very fast towards fascism. It’s an ugly kind of thing. There’s this kind of mob mentality that we have to be careful of.” Listen below to that short clip:

A former Democrat, Schnieder also claims that comedians are pressured to favor liberalism, stating “There’s a polarization that’s happening…I do think you look can look at government and go, ‘Wow, it is out of control now,’ and if you do criticize or tend to be not directly along a liberal stand, you can get murdered.”

His direct comments about Obama are not very favorable either, where he points out that Obama’s policies have been bad for businesses and his economic polices are a disaster, to paraphrase.

“There’s not one segment of business under the Obama administration that hasn’t been hurt…he attacks for-profit schools, which is totally an elitist thing from a guy that went to Harvard. I think for free, by the way,” Schneider said.

He was also critical of the media for being overly influenced by the government and not standing up for the American people.

“We don’t really have freedom of the press. It’s owned by about eight different companies, and it doesn’t really express or help the average American,” Schneider stated.

Readers can listen to the whole show HERE.


Cross posted at Before It’s News