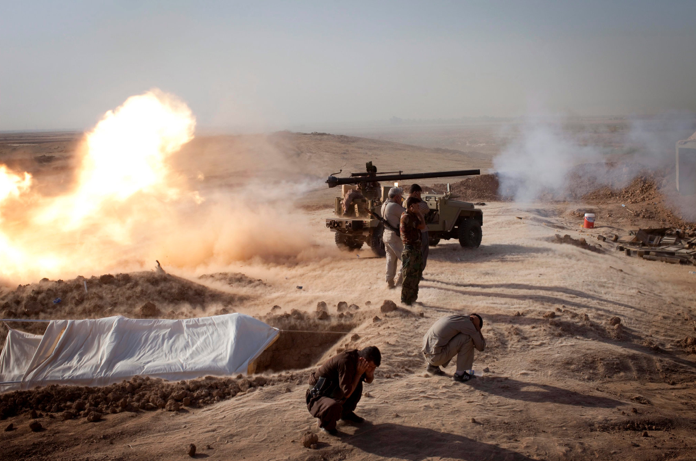 The rapid military advances made in recent months by the Islamic State, the radical jihadist organization that declared a caliphate over territories belonging to Iraq and Syria in June, has yet again prompted US military engagement in Iraq. Pentagon officials have branded the Islamic State as ‘apocalyptic’ and ‘an imminent threat’.

Washington has redeployed some 800 troops to Iraq since June, and the Obama administration has since conducted dozens of airstrikes in support of Kurdish peshmerga fighters and Iraqi Special Forces, who are fighting alongside Shiite militias once at the forefront of armed resistance to the US occupation.

Ethnic minorities in northern Iraq, such as the Christian, Turkmen and Yazidis, are considered infidels by the advancing jihadist militants and have been under siege by the Islamic State’s push into their historic lands. Washington has made its case for intervention in Iraq by coming to their defense.

The latest wave of US intervention in Iraq has produced some modest gains. Humanitarian aid has been delivered to embattled minorities; Kurdish and Iraqi fighters have retaken some areas — such as the Mosul dam — and the Islamic State’s advance toward the US-backed semi-autonomous Kurdish region has been averted for the moment.

Washington is widely expected to expand the scope of its military operation against the Islamic State into Syria, where the Obama administration has supported militias fighting since 2011 to topple Syrian President Bashar al-Assad. The Pentagon has already begun reconnaissance flights over Syria as a precursor to potential airstrikes.

Syria’s foreign minister, Walid al-Muallem, said that his country would be willing to cooperate in fighting the Islamic State, but that any strike taken inside Syrian territory without coordination with Damascus would be considered an act of aggression and a violation of his country’s sovereignty.

The Obama administration then snubbed Damascus by stating it had no intention to coordinate its actions with the Syrian government. Washington also announced that it planned to ramp up support for ‘moderate’ rebel groups fighting Syrian security forces.

The rise and eminence of the Islamic State group, and other jihadist organizations such as Jabhat al-Nusra, demonstrate the alarming extent to which policies undertaken by Western and Gulf States in Syria have spectacularly backfired, with staggering human costs.

The rebellion against Bashar al-Assad — who, despite undeniable heavy-handedness, has led a country once considered among the safest and most tolerant in the region — relies on heavily on foreign fighters and material assistance provided from abroad.

Sunni monarchies such as Saudi Arabia and Qatar are known to have provided hundreds of millions to radical militias fighting inside Syria, in an attempt to roll back the regional influence of Shiite Iran, whose key allies are the government in Damascus and Hezbollah, the Lebanese paramilitary organization. Turkey, Jordan, and Kuwait have been similarly involved in promoting anti-Assad militias.

The US, under the auspices of covert programs conducted by the Central Intelligence Agency, provided weapons and training to Islamist fighters with anti-Western views (though Washington publically claims to only support so-called ‘moderates’), many of whom have now joined the ranks of the Islamic State, according to a recent exposÃ© published in the Washington Post.

Though the existence of covert programs have been widely reported by investigative journalists and admitted by the Obama administration, the Washington Post’s report, which cites senior US and Arab intelligence figures and members of the Islamic State, is among the most critical assessments of US policy in Syria to appear in the mainstream American media.

Western and Gulf states knowingly trained militants with jihadist leanings to fight for ‘democracy’ in Libya, where they succeeded in toppling Muammar Gaddafi, and Syria, according to the report, which also claims that many fighters who now belong to the Islamic State and Jabhat al-Nusra were previously trained by French, British, and American military and intelligence personnel.

The policy being pursued in Syria — grounded in the strategy that ‘the enemy of my enemy is my friend’ — has not only unnecessarily prolonged the Syrian civil war and intensified the humanitarian calamity facing the region. It is the primary factor that has given rise to the Islamic State and any potential Western military escalation due to follow.

The Islamic State controls an area larger than the UK and controls seven oil fields and two refineries in northern Iraq, and six out of 10 oil fields in eastern Syria. It is believed to be raising more than $2 million a day in revenue from extortion, taxes, smuggling, and oil sales, by selling crude at between $25 and $60 a barrel.

As Western officials concede, there has never been a more sophisticated, disciplined, and wealthy terrorist organization. It is a strategic mistake for the Obama administration to press ahead with its campaign of regime change against the government of Bashar al-Assad, who can prove to be a useful ally in the fight against the jihadist militants.

Western countries dismissed the results of Syria’s presidential elections in June, where some 73 percent of 15.8 million eligible voters took part in the vote, which saw Assad run against two challengers and win with 88 percent. Assad clearly commands the majority support of the Syrian public, and his government does not pose a military threat to the US.

The worst move the West could make would be launching unauthorized strikes in Syria while continuing to provide arms to anti-Assad militants; such a strategy would serve to undermine the entire region’s ability to respond to the jihadist threat and open the door to wider war if the Syrian government decides to respond to US provocations.

If the Obama administration proceeds with airstrikes in Syria without the explicit permission of Damascus or UN approval, it would be an unabashed violation of international law and the UN charter. Any intervention without the approval of Congress would also violate US law and could potentially pull Washington into yet another prolonged military quagmire.

The Islamic State is built on an ideological fallacy that betrays the values of the Muslim faith and the feats of Islamic civilization, which saw multiculturalism, scientific innovation, learning and culture thrive in pre-modern caliphates. The ahistorical caliphate envisioned by Islamic State leader, Abu Bakr al-Baghdadi, is grounded in absolutist violence and nihilistic fundamentalism.

The unfolding crisis demands a sober acceptance that, by attempting to replace unsavory regimes with more agreeable proxies, the policies of Washington and its allies have worked to fuel radicalism rather than contain it. Pushing aside political and sectarian differences is an absolute prerequisite for countering the threat posed by the Islamic State and its fellow travelers.

This article appeared in the September 03, 2014 print edition of The Malaysian Reserve newspaper.
Nile Bowie is a columnist with Russia Today, and a research affiliate with the International Movement for a Just World (JUST), an NGO based in Kuala Lumpur, Malaysia. He can be reached at nilebowie@gmail.com.