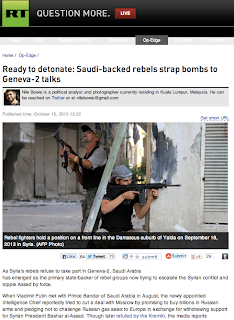 As Syria’s rebels refuse to take part in Geneva-2, Saudi Arabia has emerged as the primary state-backer of rebel groups now trying to escalate the Syrian conflict and topple Assad by force.

When Vladimir Putin met with Prince Bandar of Saudi Arabia in August, the newly appointed Intelligence Chief reportedly tried to cut a deal with Moscow by promising to buy billions in Russian arms and pledging not to challenge Russian gas sales to Europe in exchange for withdrawing support for Syrian President Bashar al-Assad. Though later refuted by the Kremlin, the media reports suggested that Bandar told Putin to forget about any political solution to the Syrian conflict.

In addition to being the main propagator of a militant anti-Shiite form of Islam that many rebel fighters subscribe to, the Saudi monarchy has become the chief financier of anti-Assad movements aimed at toppling the Syrian government and weakening its allies in Iran and Hezbollah. Russian diplomatic sources claim that the August 21 chemical weapons attack in the suburbs of Damascus was carried out by a Saudi-black op team with support from the Liwa Al-Islam group, a hardline militia headed by the son of a Saudi-based Salafi cleric.

Following the attack in August, Saudi Arabian diplomats pressured Obama to take military action — the collective message was, “You can’t as president draw a line and then not respect it.”