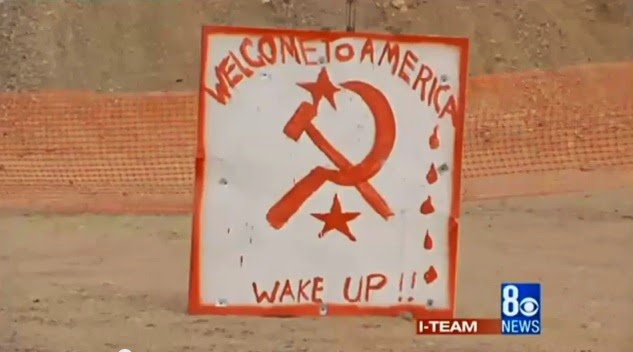 One freedom at a time, one right at a time, one battle at a time, we the people are losing each and every one of our liberties to federal authorities, and will continue to do so until we stand up against them together.

The story below is yet another example of the police state USSA in action.

Once again a situation where federal authorities arbitrarily change laws and rules and just expect the general public to blindly follow those rules.

Well one man, a rancher by the name of Cliven Bundy, has refused and does not recognize any federal authority over the land and now dozens of armed federal officers, rangers and agents, are preparing a showdown with this one older gentleman you will see in the video below.

To understand the principle Bundy is fighting for, one has to know that Mr. Bundy’s forefathers have been up and down that area since 1877, yet in 1993 the Bureau of Land Management (BLM) decided to change the grazing rules for Gold Butte to protect the endangered desert tortoise, an area Bundy and his family had been using since before the BLM even existed.

Bundy’s message is simple: “This has become a police state, and this is an example of it right here.“

The example he talks about is how the Feds have set up a “free speech zone” in the area, a media zone and have created a wall of agents to prevent the general public from entering a 600,000-acre section of “public land,” as they prepare to round up Bundy’s cattle and sell it off.

Bundy continues on to tell reporters “My forefathers have been up and down the Virgin Valley ever since 1877. All these rights I claim have been created through pre-emptive rights and beneficial use of the forage and water. I have been here longer. My rights are before the BLM even existed.”

He has fought this battle politically, legally and through the media, he says, his neighbors support him, and he vows he will “fight it on the ground if I have to.”

One man is standing up for not only his rights, but for freedom and liberty…… who will stand with him?