By Susan Duclos – Cross posted from Before It’s News 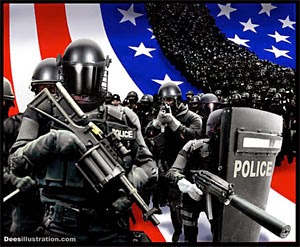 I ran across a piece at This Can’t Be Happening,  that is disturbing to say the least, where not only are police shootings of unarmed civilians discussed, so is the militarization of our local police forces in the US, with statistics that should drop the jaw of anyone reading it.  While those statistics tell a story, perhaps the most damning statements about the US becoming a police state comes from the Chief of Police in Upper Dublin, PA., Terrence Thompson, who states that he understands the need for more powerful weapons to counter the weapons now used by criminals, but points out how SWAT, for example, is being used in a manner that it was not created for and how high powered weapons are being utilized in situations where there is no need. Chief Thompson also lets the public know exactly where he sees the US heading:

Thompson decries what he calls “camo creep” in policing, a trend he says is at least partly driven by “politicians who don’t see where this is going.”
And where is that?
“I don’t like the idea of a police state, but that’s where we seem to be heading,” he says.

My only disagreement with Chief Thompson would be that we are not heading towards being a police state, as the videos below clearly show, we are already there.

YouTube is full of videos showing this police state mentality, I wrote about this just the other day where a Nazi-like cop was busted lying on her “officer narrative,” after multiple footage captured by the family she abused became public.

Another example can be seen with the recent total FAIL of the NYP in their Twitter campaign #myNYPD which was meant to show how much NY citizens loved their police force, but which backfired spectacularly when user after user started posting images, videos and statements about NYPD’s police brutality, as discussed in the first video below at the 1:20 minute mark.

For the record, I believe wholeheartedly there are many, many more good cops vs bad cops, to put it simply, but these examples shown below make it harder for those “good guys,” because the brutality and abuse by the bad cops endanger the lives of those that truly did join to serve and protect.