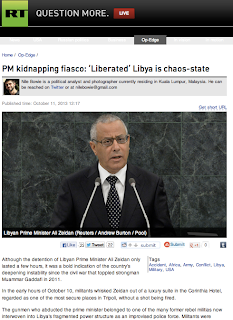 Although the detention of Libyan Prime Minister Ali Zeidan only lasted a few hours, it was a bold indication of the country’s deepening instability since the civil war that toppled strongman Muammar Gaddafi in 2011. In the early hours of October 10, militants whisked Zeidan out of a luxury suite in the Corinthia Hotel, regarded as one of the most secure places in Tripoli, without a shot being fired. The gunmen who abducted the prime minister belonged to one of the many former rebel militias now interwoven into Libya’s fragmented power structure as an improvised police force. Militants were angered by the capture of suspected militant Abu Anas al-Liby, who was abducted days earlier off the streets of Tripoli by US Special Forces in connection to the 1998 bombing of US embassies in Kenya and Tanzania.

Prime Minister Zeidan was held over suspicion that he allowed al-Libi’s abduction to take place, despite publicly raising concerns over the illegality of the snatch to US authorities. Reports indicate that Zeidan’s abductors were not willing to let him go, and that another militia — calling itself the ‘Reinforcement Force’ — intervened and freed the prime minister by force. The Libyan leader escaped unharmed, certainly the best scenario that could have resulted from this crisis. Information trickled out slowly in the tense few-hour period during which Zeidan’s whereabouts were unknown, and had allied militias not come to his aid, the situation could have spiraled into a hostage crisis or worse.