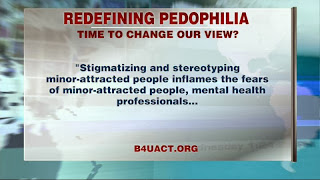 What consenting adults is between consenting adults as long as they don’t shove it down my throat, whether it is the sexual preferences of heterosexuals or homosexuals, a person’s private life should be just that, private.

Pedophilia is a whole different ballgame, children cannot consent, they do not have the maturity to make that type of decision so when I see a headline like “Pedophilia Now Classified As A Sexual Orientation,” I call BS.

People can classify themselves as heterosexual, homosexual, asexual, metrosexual. There are endless sexual orientations under the sun, and now, pedophilia can be added to the list.
In the fifth edition of the Diagnostic and Statistical Manual of Mental Disorders (DSM V), the American Psychological Association (APA) drew a very distinct line between pedophilia and pedophilic disorder. Pedophilia refers to a sexual orientation or profession of sexual preference devoid of consummation, whereas pedophilic disorder is defined as a compulsion and is used in reference to individuals who act on their sexuality.

Pedophilia is not a sexual preference, it is a sickness and should continue to be treated as such. Even proponents cannot guarantee that a pedophile will not act on their fantasies as evidenced by a recent case where a convicted pedophile cut off his ankle monitor and attacked a 16 year old boy as shown in the video below.