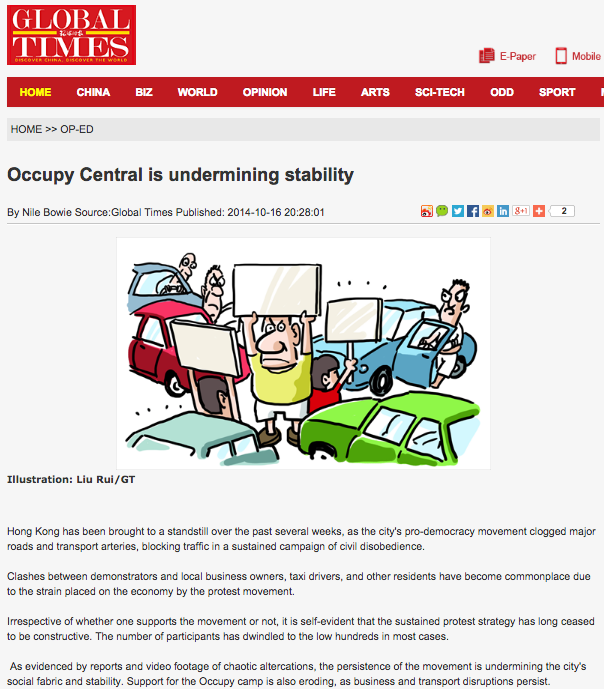 Hong Kong has been brought to a standstill over the past several weeks as the territory’s pro-democracy movement clogged major roads and transport arteries, blocking traffic in a sustained campaign of civil disobedience. Clashes between demonstrators and local business owners, taxi drivers, and other residents have become commonplace due to the strain placed on the economy by the protest movement.
Irrespective of whether one supports the movement or not, it is self-evident that the sustained protest strategy has long ceased to be constructive. The number of participants has dwindled to the low hundreds in most cases. As evidenced by reports and video footage of chaotic altercations, the persistence of the movement is undermining the city’s social fabric and stability. Support for the Occupy camp is also eroding as business and transport disruptions persist.
Occupy Central is the latest manifestation of an increasingly common kind of movement, whereby a consolidated group of frustrated young demonstrators occupy public areas and refuse to disperse until their demands are met. Elder protest leaders and opportunistic opposition politicians set the agenda, while hordes of students enforce their demands on the street. In the push to achieve the goal of the campaign, the negative impact on local businesses and people’s lives are of little concern.
While movements like these tend to crop up in highly polarized societies, protestors will shrewdly accept nothing less than their demands, even if they represent a contentious minority position. That these groups sing the praises of ‘democracy’ makes for good satire. However, to dismiss these movements altogether as an annoyance or threat to public disorder obfuscates important political signals which need to be listened to.
As it pertains to Hong Kong, an extremely complex set of social and economic factors motivates and fuels the protest movement. The rising eminence of mainland cities as shipping and financial hubs casts a shadow over Hong Kong, which has long ceased to serve as an exclusive gateway into China for foreign investors and banks.
Beijing has taken a hands-off approach to Hong Kong, allowing the territory to operate with a high degree of political autonomy. While there is little evidence of the central government trying to assert its authority and systems onto the territory, the large volume of mainlanders who come to Hong Kong as tourists and property-buyers have instilled in many the notion that Hong Kong risks being absorbed into the mainland’s social and cultural milieu.
The idea of protecting the territory’s unique identity from absorption into the larger polity propounds demonstrators with an ardent sense of urgency and justice. It is undeniable that Hong Kong is rife with chauvinist attitudes toward mainlanders. The demonstrations, in turn, have become an avenue for protestors to assert their status and identity, veiled under a homogenizing pro-democracy banner. Mainland reactions to the protests have been lukewarm because these sentiments can be widely inferred.
Another more obvious factor is economic in nature, pertaining to the territory’s soaring income inequality and the increasing difficulty to make ends meet. The ‘Hong Kong dream’ is fast evaporating, as young people increasingly view barriers to home-ownership and greater material affluence as becoming ever more pronounced. Most poignantly, there is a major trust deficit toward the current administration that could continue to widen and polarize society.
International media coverage, which has echoed the sympathetic statements made in favor of the protestors by Western governments, has oversimplified the Occupy Central movement by overlooking questions of identity and dislocation. The movement has been framed through a familiar cookie-cutter narrative that is averse to criticizing the student movement whilst often exaggerating the extent of police misconduct.
Teargas was used to disperse the protestors, which had the unintended effect of galvanizing support for the movement, only when students attempted to storm government buildings. In contrast to the heavy-handed conduct and police brutality that has been repeatedly demonstrated in Europe and the United States, the actions of the Hong Kong police were highly restrained throughout. These demonstrations have proved beyond doubt that the Hong Kong authorities have respected their citizens’ rights to assemble.
Western media has also mischaracterized the historical treaty between Britain and China that set conditions for the handover, while obfuscating a critical point: that implementing the universal suffrage system was Beijing’s idea. Nowhere in the 1984 Sino-British Joint Declaration is universal suffrage mentioned. As it pertains to the territory’s Basic Law, the chief executive will be elected by universal suffrage upon nomination by a broadly representative nominating committee.
There is no substance to the allegation that China ‘reneged on its commitment’ to offer universal suffrage, because the law always stipulated that a nominating committee would approve candidates for chief executive. By selectively reporting from pro-Occupy perspectives, the Western media has created an impression that Beijing is suppressing democracy, when in fact the population will be directly electing the chief executive through one-person-one-vote for the first time in history in 2017.
The one-person-one-vote system was never a feature of life under British colonial rule. By 2020, both the chief executive and legislative council be will elected through universal suffrage, representing a move toward popular ballot-box politics. A 1,200-member electoral college currently elects the chief executive; therefore, the accommodation of direct elections will be undeniably more representative than the current arrangement.
It is hardly surprising that the figures associated with the Occupy Central movement, be they student leaders or opposition politicians, have a relationship with the US government, through its foundation, the National Endowment for Democracy (NED). The organization channeled hundreds of thousands into programs to mobilize university students to demand universal suffrage, while the media has campaigned on their behalf, romanticizing the so-called ‘Umbrella Revolution’ on 24-hour news cycles in the West.

In keeping with other campaigns that have been bolstered by NED’s largesse, the protest movement brands itself with a symbol or color — the umbrella in this case — which is peddled as a fashion statement. The fact that these movements speak with emotions rather than facts make ‘revolution’ a very easy product to sell. Washington’s statements in support of Occupy Central are staggeringly hypocritical given the heavy-handed suppression of the US Occupy movement over the years, in addition to the regular accounts of police brutality that have enflamed race-relations in places such as Ferguson.

US support for the demonstrations in Hong Kong should be seen as part and parcel of a wider strategy by Washington to encourage agitation in China’s periphery regions and territorial disputes. It is only a matter of time before the protest movement loses steam, but the complex attitudes driving the discontent will not be easy to placate. Dialogue between the government and opposing forces will need to take place eventually, but the movement needs to know when to compromise.

A version of this commentary appeared in the Global Times.
Nile Bowie is a columnist with Russia Today, and a research affiliate with the International Movement for a Just World (JUST), an NGO based in Kuala Lumpur, Malaysia. He can be reached at nilebowie@gmail.com.