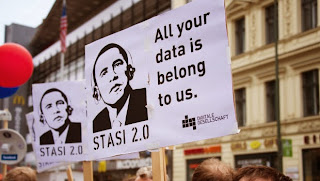 More fallout from the NSA revelations now includes the European Union considering sanctions against the US for the expanded spying the NSA has been conducting against some of our closest allies.

The agreement the EU is debating on suspending is the Terrorist Finance Tracking Program, which allows, according to Huffpo “access to funds transferred through the private, Belgium-based Society for Worldwide Interbank Financial Telecommunication, which handles the movement of money between banks worldwide.”More in the video below: