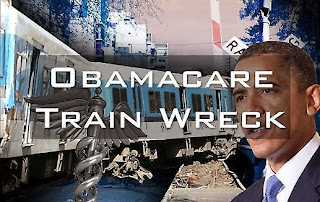 Americans have until Dec. 23, 2013, pushed back until December 31 now, to purchase insurance that kicks in Jan. 1, 2014, but the website itself that the administration had three years to create, will be responsible for applicants not being insured by the date they are legally required to be or they face a fine (Page #25-26 of the Obamacare Navigator SOP Manual), due to the overwhelming amount of “glitches” to date that have had to be addressed and the continued technical issues.

From the moment Obamacare aka the Affordable Care Act was first proposed it seemed like it was cursed and the curse continues to this very day. From the polling before it was passed to the most recent 50,000 – 60,000 paper applications that have not been processed, the stipulations written into the ACA law have not been met by the administration and due to the incompetence of the admin’s rollout, applicants may not be able to meet the laws requirements either.

Democrats, who at the time controlled both the House of Representatives and the US Senate, along with Barack Obama, passed and signed it into law against the majority opposition of the American public, shown consistently in poll after poll, before it was passed and signed into law, during the battle over it, and after it’s passage. (Link to Real Clear Politics collection of polls on the healthcare law)

Then came the portions of the law that were deemed unsustainable, portions that some Democratic lawmakers admitted outright they never bothered to read before passing it, such as the Community Living Assistance Services and Supports, (Class Act) which was deemed unsustainable before it’s passage, but took until October 2011 for the Obama administration to pull the plug on it and admit in a letter to Congress written by Health and Human Services Secretary Kathleen Sebelius “Despite our best analytical efforts, I do not see a viable path forward for CLASS implementation at this time.”

Then the federal insurance exchange program which assumed that all states would jump on board and provided money within the bill to help states set up the exchanges but never addressed nor set aside the funds for the federally run backup when only 17 states opted in and Obama administration officials were left scurrying to scrape together the money to fund them in the other 33 states. Officials called it an “oversight.”

Both the employer mandate and the small business exchange were both arbitrarily postponed by the administration, despite the law having a legal start date.

The 1099 requirement was one aspect that supposedly made Obamacare “affordable” yet it was one of the first parts to be repealed, with total bipartisan support.

More problems plagued the law, even before the disasterous rollout, including the Child Only Plans, the PCIP, the Basic Health Plan and the Obamacare for Congressional staff, just to name a few others.

Then came the two big lies…. one voted the lie of the year, “if you like your healthcare plan, you can keep it” and the other that the Individual Mandate was not a tax, which in the video below you will see Barack Obama vehemently assert….. before the Supreme Court said the only way it could survive the constitutional challenge was AS a tax.

Watch the video above before reading the Supreme Court ruling saying the Individual Mandate is a tax, HERE.

Jump forward to the problems, the curse, that still plagues the Obamacare law, the rollout of the health care signup website, which the Obama administration had three years to create, test and perfect, yet crashed in the first week, with even media outlets like MSNBC, that were supportive of the law, major proponents, giving up on trying to show the public and actual signup, shown in the video below.

Then the Obama administration vowed to fix it and to investigate the “botched”  rollout.

Another major setback was undercover cameras were brought in to catch the Obamacare navigators encouraging applicants to lie about income and other things in the signup process, money from bank accounts ‘accidentally” taken from people who could not afford it causing overdrafts of their accounts, the finding that even convicted felons could become navigators, which have access to confidential sensitive information of applicants, including back account numbers, Social Security numbers, biometrics, tax information, Date of Birth, etc…

The House Oversight and Government Reform Committee report found, among other things:

Navigators from the Urban League of Dallas were captured on video encouraging applicants to lie on their health insurance application so the applicants could qualify for tax subsidies.

Navigators were also recorded advising an applicant to lie about her smoking habits to obtain a lower monthly premium. It was later discovered that two of the so-called Navigators involved in the incident were assisting consumers with their applications even though they had not completed their training and certification requirements.

One self-identified Navigator gave a television interview in which she told viewers blatantly incorrect information–that applicants’ credit scores could impact their eligibility for certain plans. It later came to light that the woman was not a certified Navigator but rather a volunteer with a Navigator organization.

Mountain Project, Inc., a Navigator organization in North Carolina, has been collecting and mailing paper applications on behalf of applicants, in violation of Navigator rules and procedures.

Finally, we now see there is a backlog now being reported with 50,000 – 60,000 paper Obamacare applications sitting around unprocessed.

The question now is will the Obama administration actually fine the applicants that are not signed up by the date required by law when it was the incompetent rollout that was responsible?