The situation in Ukraine and the rhetoric from the US government on the authority of Barack Obama has shown the world how unrealistically Obama sees the world, specifically his foreign policy decisions, to which the Washington Post editorial board says, as is quoted in the video below from Mox News, “Obama has a foreign policy based more on how he thinks the world should operate than on reality.”

That is it in a nutshell as the panel discussion provides evidence of. Russia and Vladimir Putin has clearly shown publicly how weak and ineffective the Obama administration truly is. While Obama’s vision of Utopia is to downsize the US military, other countries are expanding theirs. Obama’s threats of sanctions and chest puffing is having no effect on Russia who understands there is nothing Obama can doabout Russia taking back the Crimea region of the Ukraine.

The US warships sent to the region is all show, and that show is having no effect, proven by the latest developments where Russia just took over a Ukrainian military base, without a shot fired.

What Obama has done is weaken the US to the point where CHina, Russia and others have absolutely no respect for him, the power of the US and laugh off Obama’s “red lines” as the continue to cross them even as he or his administration is issuing them.

What Obama has done though is created an atmosphere where other growing countries now have the ability to strike a devastating blow against the US, not with bombs or warships, but economically by dropping the dollar and creating currency and trade wars where the US dollar will be replaced as the world reserve currency which causes the much talked about global economic reset.

Obamas fantasy land has just become America’s nightmare and his head is so far up…….in the clouds, he doesn’t even understand the damage he caused OR like many believe, he has deliberately worked to bring America down from within.

Let’s go back to Obama’s support of the Muslim Brotherhood for a second….. their stated goal is to bring America down from within.

Written sometime in 1987 but not formally published until May 22, 1991, Akram’s 18-page document listed the Brotherhood’s 29 likeminded “organizations of our friends” that shared the common goal of dismantling American institutions and turning the U.S. into a Muslim nation. These “friends” were identified by Akram and the Brotherhood as groups that could help convince Muslims “that their work in America is a kind of grand Jihad in eliminating and destroying the Western civilization from within and ‘sabotaging’ its miserable house by their hands … so that … God’s religion [Islam] is made victorious over all other religions.”

Look at the image below very carefully, note the names and look each one up. 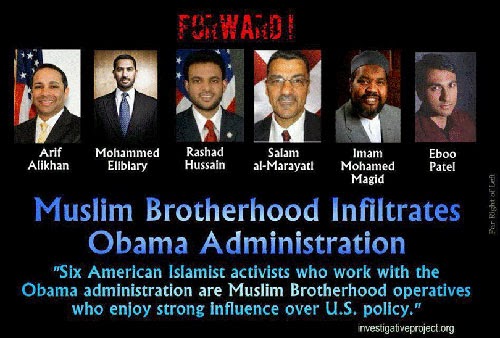 Pretty much says it all, doesn’t it?

Ask yourself if any leader would bring the enemy into their administration, an enemy who has stated their goal was to bring down a country from within, unless that leader was part of the plan?

Just something to think about.