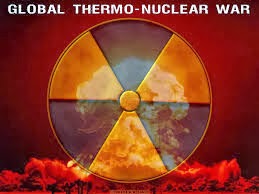 As of today, it is a fair estimate, that every living person on this planet is now faced within probably twenty-six days between now and Hell. There are potential alternatives, not many. This is, now, “count-down.” – Lyndon H. LaRouche, Jr. – February 5, 2014

Lyndon LaRouche is once again informing the public of how the Brits and drug money got Barack Obama elected, and speaks of the dire economic crisis in the Trans-Atlantic where a chain reaction is occurring forcing economies into bankruptcy which is driving the whole world into a thermonuclear World War III.

In the video below, aside from LaRouche’s statement, Jeff Steinberg at the National Press Club also explains how the public is trying to block out these realities because it is “too frightening” to contemplate and that Obama must be impeached to prevent World War III.

There is much more to the short video below, so watch it, be warned and be prepared for what is coming.

In the video details from LaRouchePAC it states clearly “The situation in Ukraine is a potential trigger point for the launch of a Thermonuclear World War III, unless American Patriots rally to immediately impeach Barack Obama. “