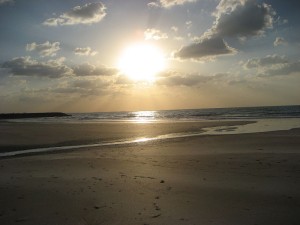 For years, experts have warned us that overexposure to the sun can lead to melanoma, the deadliest form of skin cancer. We’ve been told to coat ourselves in sunscreen year round – no matter what the weather is like. Experts also urge us to wear hats, shirts, and other cover-ups while outdoors, and to avoid peak sun at midday.

Now a major new study has shown that those who avoid sunshine are twice as likely to die than those who sunbathe every day.

The study, which was conducted by researchers at the Karolinska Institute in Sweden, followed nearly 30,000 women for 20 years.

“The results of this study clearly showed that mortality was about double in women who avoided sun exposure compared to the highest exposure group.

Sun exposure advice which is very restrictive in countries with low solar intensity might in fact be harmful for women’s health.”

The mortality rate was increased two-fold among avoiders of sun exposure as compared to those with the highest sun exposure habits.”

The study followed 29,518 Swedish women who were recruited from 1990 to 1992. They were asked to monitor their sunbathing and tanning salon habits.

After 20 years, 2,545, of the women had died, and researchers were surprised to find that women who never sunbathed during the summer months were twice as likely to have died from any cause.

1.5 women in a 100 who had the highest exposure to UV were found to have died, compared with 3 in 100 for women who had avoided sunbathing.

The researchers said that advising the public to wear sunscreen and avoid the sun could be doing more harm than good by robbing us of a vital nutrient – Vitamin D.

Vitamin D is created in the body through exposure to sunshine. It is strengthens the immune system, bones, and muscles, and is known to help prevent conditions such as diabetes, multiple sclerosis, heart disease, cancer, high blood pressure, schizophrenia, and rickets. In fact, cases of rickets in the UK have risen fourfold in the last 15 years as sunscreen has increased in popularity.

Studies have also shown that vitamin D can increase survival rates for women with breast cancer, and deficiencies can lead to prostate cancer in men. Low levels of vitamin D have also been linked to more aggressive forms of skin cancer.

Experts estimate that up to 85% of people are Vitamin D deficient, but some say that number may be even higher.

The title “vitamin” is a bit of a misnomer – what we refer to as “vitamin” D is actually a steroid hormone that is involved in making hundreds of enzymes and proteins in the body. The most potent steroid hormone in the body, Vitamin D affects nearly 3,000 of our 30,000 genes.

Most people only get about 10% of our Vitamin D from dietary sources, so in order to get enough, the rest must come from sun exposure or supplements. Twenty minutes of sun exposure without sunscreen provides about 20,000 units of Vitamin D in most people.

Too much exposure can cause premature aging, and has been linked to some forms of skin cancer. Being careful not to burn is crucial.

Vitamin D is fat soluble, so if you take it in supplement form, it IS possible to take too much. Your personal health care provider or an independent lab can test your blood and provide information on your levels and provide dosing recommendations.

Your body will not generate toxic levels of Vitamin D, as it self-regulates production and will only make what you need.

Vitamin D deficiency doesn’t always alert us with symptoms, but there are some signs you can watch for that may mean you need more:

As with anything in life, balance is important. And, studies have shown that time outdoors in the sunshine makes people happier.