Japan and the U.S. are doing everything they can to cover up the danger of the Fukushima crisis.

The Japanese government, which already has a long history of cover-ups and opaqueness, is on its way to becoming even less open and transparent after the lower house the Diet, Japan’s parliament, passed the Designated Secrets Bill on Tuesday. With new powers to classify nearly anything as a state secret and harsh punishments for leakers that can easily be used to intimidate whistleblowers and stifle press freedom, many in Japan worry that the if the bill becomes law it will be only the first step towards even more severe erosions of freedom in the country.

Even politicians inside the ruling bloc are saying, “It can’t be denied that another purpose is to muzzle the press, shut up whistleblowers, and ensure that the nuclear disaster at Fukushima ceases to be an embarrassment before the Olympics.”

The new law would enact harsher punishment to leakers and ominously would allow journalists who obtained information by “inappropriate means” and whistleblowers to be jailed for up to ten years. The law would also allow the police to raid the offices of media organizations and seize evidence at their discretion.

The bill has even grants no longer existent agencies the power to classify secrets.

Despite the bill’s enlargement of the state’s power over information, it contains no oversight process to act as a check on ministries and government agencies designating large amounts of information as ‘secret’ for capricious or self-interested reasons.

Masako Mori, the Minister of Justice, has declared that nuclear related information will most likely be a designated secret. For the Abe administration this would be fantastic way to deal with the issue of tons of radiated water leaking from the Fukushima Daichi Nuclear Power Plant since the triple meltdown in March of 2011. There seems to be no end to stopping the toxic waste leaks there but the new legislation would allow the administration to plug the information leaks permanently.

Mizuho Fukushima, former leader of the Social Democratic Party, compared the bill to the pre-World War II Peace Maintenance Preservation Laws and other Secrecy laws at the time, remarking that there was a time in police-state Japan when the weather reports could be considered “secret.”

““Once you open the door to such kind of laws, the government will have the right to designate anything as a state secret and by speaking about it or mentioning it, you can be arrested and prosecuted.” Ms. Fukushima explained, “Especially during war time, it was very difficult for defendants and lawyers to fight their court cases, because they were not told what exactly what was the state secret that they had been accused of having revealed.”

Outspoken Upper House Councilor Taro Yamamoto, who is known to be a strong supporter of investigative journalism, minces no words: “The path that Japan is taking is the recreation of a fascist state. I strongly believe that this secrecy bill represents a planned coup d’Ã©tat by a group of politicians and bureaucrats,” he warned.

While his statement may seem alarmist, even a senior official of the National Police Agency agrees. “I would say this is Abe’s attempt to make sure that his own shady issues aren’t brought to light, and a misuse of legislative power.

The Japan Newspaper Publishers & Editors Association, the Civil Broadcasters Federation, and most major news organizations in Japan’s have expressed staunch opposition to the bill.

Japan is about to take a giant step back into its oppressive past. When one also considers Prime Minister Abe’s stated ambition to restart Japan’s nuclear power plants and remove Article 9 from the constitution, the article which prevents Japan from waging war, it seems like the Empire of The Sun may be moving towards darker times.

A citizen was forcibly removed from the balcony in the Diet where he was observing the debate of the State Secrecy Protection Law in the Lower House on November 26, 2013, as he shouted his opposition to the passage of the law. His mouth was stuffed with cloth so that he couldn’t shout any more while being removed by several guards against his will. 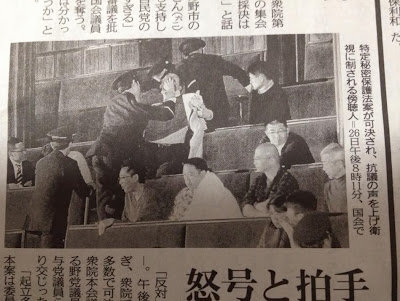 What’s even scarier to me than the man being forcibly removed by the guards is people sitting near him. They just sit there as if nothing is happening. They are not even looking; the one in the same row even looks away.

It’s not just Fukushima … and It’s not Just Japan

Governments have been covering up nuclear meltdowns for 50 years.

There has been a cover-up by the American government ever since the Fukushima earthquake. The American (and Canadian) authorities virtually stopped monitoring airborn radiation, and are not testing fish for radiation.

The U.S. government increased allowable radiation levels so that we could be exposed to radiation. Nuclear expert Arnie Gundersen says that high-level friends in the State Department told him that Hillary Clinton signed a pact with her counterpart in Japan agreeing that the U.S. will continue buying seafood from Japan, despite that food not being tested for radioactive materials.

The American government controls Japanese nuclear policy. And the Japanese would never have proposed such a draconian bill without U.S. backing. Indeed, the U.S. Charge d’Affairs Kurt Tong said of the Japanese bill:

It’s a positive step that would make Japan a “more effective alliance partner.”

Earlier this year, the acting EPA director signed a revised version of the EPA’s Protective Action Guide for radiological incidents, which radically relaxed the safety guidelines agencies follow in the wake of a nuclear-reactor meltdown or other unexpected release of radiation. EPA whistleblowers called it “a public health policy only Dr. Strangelove could embrace.”

Whistleblowers at American nuclear facilities (like all other types of whistleblowers) have also been mercilessly harassed.

The American government repeatedly covers up how bad things are, uses claims of national security to keep everything in the dark, and changes basic rules and definitions to allow the game to continue. See this, this, this and this.

When BP — through criminal negligence — blew out the Deepwater Horizon oil well, the government helped cover it up (and here).  As just one example, the government approved the massive use of a highly-toxic dispersant to temporarily hide the oil.

The government also changed the testing standards for seafood to pretend that higher levels of toxic PAHs in our food was business-as-usual.

The government covers up the disgusting and unhealthy natureof much industrially-produced food.

The government’s response to the outbreak of mad cow disease was simple: it stopped testing for mad cow, and prevented cattle ranchers and meat processors from voluntarily testing their own cows (and see this and this)

The EPA just raised the allowable amount of a dangerous pesticide by 3,000% … pretending that it won’t have adverse health effects.

In response to new studies showing the substantial dangers of genetically modified foods, the government passed legislation more or less pushing it onto our plates.

The Centers for Disease Control — the lead agency tasked with addressing disease in America — covered up lead poisoning in children in the Washington, D.C. area.

The former head of the National Mine Health and Safety Academy says that the government whitewashed the severity of the Tennessee coal ash accident.

And after drug companies were busted for using fraudulent data for drug approval, the FDA allowed the potentially dangerous drugs to stay on the market.

Indeed, the cynical might say that the main function of government these days is to throw money at giant corporations and to cover up for them when their misdeeds are revealed.

And the American government is censoring reporters at least as much as Japan.

Japanese Senator: “The Path That Japan Is Taking Is The Recreation Of A Fascist State” was originally published on Washington's Blog