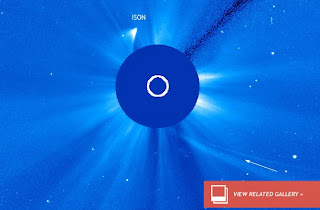 Well, Thanksgiving day comet watchers had a very interesting time as every report on whether Comet ISON survived it’s encounter with the sun seemed to contradict the previous report. Some saying it completely disintegrated, others claiming it came around intact.

Updated information is still being analyzed but the picture is a little clearer.

Something survived according to Discovery News, who calls premature reports of ISON’s demise, “greatly exaggerated.”

Remarking on the debris stream, NASA’s Tony Phillips of Spaceweather.com said: “It could be a small fragment of Comet ISON’s nucleus or perhaps a “headless comet” – a stream of debris marking the remains of the comet’s disintegrated core.”

Then, in some striking images released by SoHO’s LASCO instrument (pictured top), which has a wide-angle view of the sun’s lower atmosphere (the corona), a very comet-like object appears to have survived after perihelion.

The question becomes, as they note later in the article linked above… what survived? Is the nucleus still intact?

“Now, in the latest LASCO C3 images, we are seeing something beginning to gradually brighten up again,” said astrophysicist Karl Battams, of the U.S. Naval Research Laboratory, in a NASA Comet ISON Observing Campaign (CIOC) blog update. “One could almost be forgiven for thinking that there’s a comet in the images!”

“We have a whole new set of unknowns, and this ridiculous, crazy, dynamic and unpredictable object continues to amaze, astound and confuse us to no end,” said Battems.

Space Weather simply says “CANCEL THE EULOGY: Comet ISON flew through the sun’s atmosphere on Nov. 28th and the encounter did not go well for the icy comet. Just before perihelion (closest approach to the sun) the comet rapidly faded and appeared to disintegrate. This prompted reports of ISON’s demise. However, a fraction of the comet has survived.”

ISON has proven to be very unpredictable, with NASA admitting they couldn’t predict it even before it’s encounter with the sun, therefore no one should be surprised that it is still acting strange and not following any preset pattern from prior comets’ actions.

The question now isn’t “if” ISON survived, it is what has it survived as?

The MSM is catching up with Alternative Media, a day late as headlines include “scientists see tiny hope,” is now being reported at MSN, AP, ABC News etc…..

Amusing thing is, now that the MSM is admitting something survived, those that said ISON survived last night, like BPEarthWatch, are saying the nucleus might not have survived intact. (In a video below)

Others… see something huge coming out, as CyberTribe shows below.

My question still remains….. where is the debris trail headed, how huge is it and how will it effect Earth?