File under:  What happens over there…

Over the years, the politicians and the msm have worked hard to convince us all that the terrorist IRA that killed and maimed many – both in Northern Ireland and the British mainland – are now men of peace.  As any long-time observer will remember, much was made of the killing days being over, and the British Military was deemed unnecessary now that peace had come to NI.

Whatever!  As one who lived on the British mainland at the peak of the IRA activities, and seeing their work up close and personal, I have never bought into the campaign to convince us all that these terrorists are now un-armed, peace-loving, political statesmen. 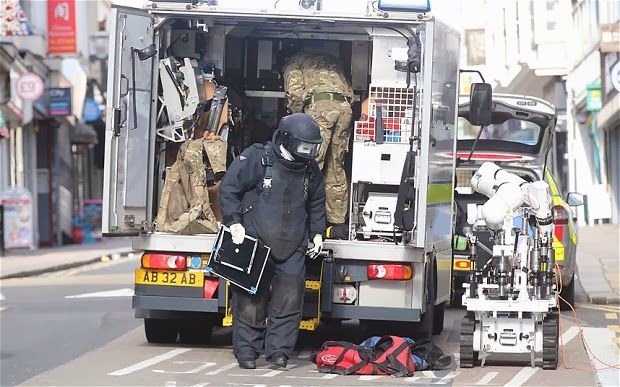 A newly-formed dissident republican group called the ‘New IRA’ is the main suspect in the hunt for letter bombers targeting British military recruitment offices, security sources said.  The group formed two years ago from remnants of the Real IRA and other paramilitary factions is most likely behind seven crude parcel bombs delivered to careers offices this week.

Recruiting centres remain on high alert, but open as usual, after the wave of basic, but viable bombs was sent to addresses across the south east of England.
Anti terrorism sources said all the decipherable postmarks on the A4 packages could be traced back to the Republic of Ireland, with at least two sent from Dublin and one sent from a border county.
Sources also revealed more details of the bombs, which were made from basic packets of black explosive powder rigged to crude detonators designed to explode when the parcel was opened.
[…]

No group has yet claimed responsibility for the bombs, but security sources said the dissident republican ‘New IRA’ was the “strongest line of enquiry”…

Right. As anybody who pays attention knows, terrorists NEVER fade away; they just change their public faces as they pursue their goals of killing and maiming –  spreading terrorism.

Go read the rest of this one here,