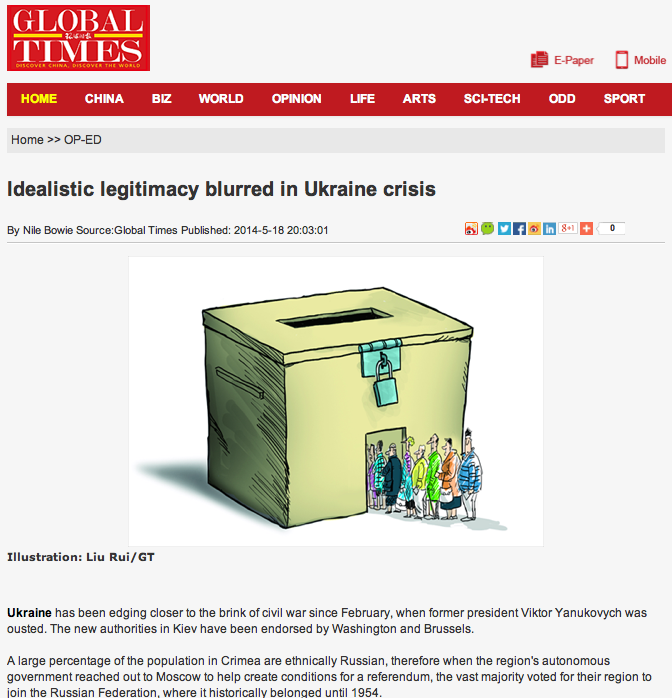 Ukraine has been edging closer to the brink of civil war since February, when former president Viktor Yanukovych was ousted. The new authorities in Kiev have been endorsed by Washington and Brussels.

A large percentage of the population in Crimea are ethnically Russian, therefore when the region’s autonomous government reached out to Moscow to help create conditions for a referendum, the vast majority voted for their region to join the Russian Federation, where it historically belonged until 1954.

Russia has deep ties with Crimea and a strategic naval base on the peninsula, so its swift response to the toppling of the government in Kiev was to seize the historic moment by holding a referendum.

Washington and Brussels, along with many of their allies, condemned the referendum in Crimea and accused Russia of “invading” and “annexing” the territory, while Moscow claimed that an existing security treaty between Russia and Ukraine legitimized the presence of Russian soldiers.

Despite the fact that many disagree with the way in which Crimea integrated itself into the Russian Federation, there is some irony in the fact that Washington and Brussels view the peaceful democratic exercise of citizens voting to decide the fate of their territory as illegitimate.

US Secretary of State John Kerry, High Representative of the EU for Foreign Affairs and Security Policy Catherine Ashton, and UK Foreign Secretary William Hague all had nice things to say about protesters on the Maidan. The Yanukovych government was condemned for sending riot police out against protesters.

The interim government in Kiev recently launched an “anti-terrorist” operation in the eastern and southern regions of Ukraine. Kiev’s military incursion has seen bloodshed and dozens of casualties in towns such as Odessa, Mariupol, Slavyansk, Kramatorsk and elsewhere. The Obama administration considers the Ukrainian government’s operation to be “proportionate and reasonable.”

Donetsk and Lugansk, the eastern-most regions of Ukraine, have recently held a referendum on the question of self-rule, which Kiev, Washington, and Brussels have denounced and considered entirely illegitimate.

Following the poll results, the Donetsk region declared its self-proclaimed independence and announced its intention to join the Russian Federation.

Russian President Vladimir Putin initially recommended that the referendums in the east be postponed, although leaders in the region held them anyway. As the recent events show, Russia has influence over eastern Ukraine, but not control.

The situation in Ukraine requires one to reflect on the question of assigning democratic legitimacy and illegitimacy. Washington and Brussels are keen to formalize the Kiev regime’s ascent to power, which is why those countries have put much emphasis on the scheduled May 25 polls.

Many in the West have attempted to discredit the Crimea referendum by alleging that the vote would be conducted under the barrel of Russian guns, although there were no deaths or violent acts committed during the referendum itself.

In essence, the Western world is only interested in democracy if the results serve its interests, namely to legitimize an anti-Moscow regime in Kiev that will incrementally integrate itself into NATO’s orbit. The eligibility of a state, region, or people to exercise the right to self-determination is entirely selective.

The Obama administration is using the present opportunity to slap sanctions on Moscow and drive a wedge between Russia and Europe, the latter being more cognizant and vulnerable to the boomerang effect that sanctions can create.

Putin has surprised many observers by endorsing the elections and calling for conciliatory conditions to be created in the county ahead of the scheduled May 25 polls. The immediate priority for Moscow is bringing Kiev to the negotiating table with the eastern region.

Kiev and its backers should take a pragmatic approach. Citizens of the east who cast their vote in the recent referendums are clearly not deserving of the “terrorist” label.

The outcome represents the popular sentiments of a mass movement irrespective of its legitimacy or illegitimacy.

The ethical approach demands an end to polarizing military operations and the start of a genuine national dialogue.

This article originally appeared on the Global Times.
Nile Bowie is a Malaysia-based political analyst and a columnist with Russia Today. He can be reached at nilebowie@gmail.com.