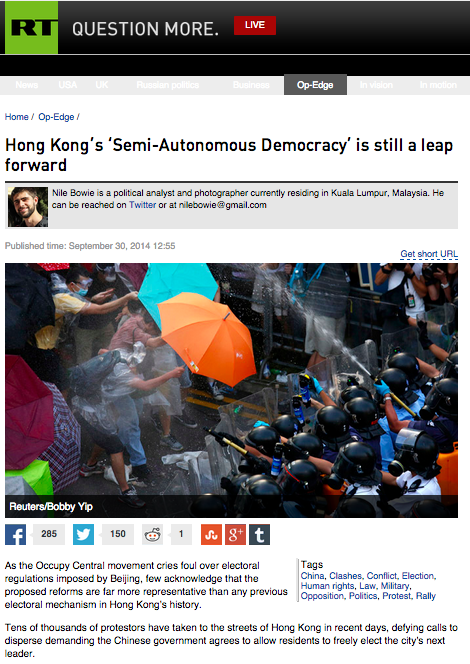 As the Occupy Central movement cries foul over electoral regulations imposed by Beijing, few acknowledge that the proposed reforms are far more representative than any previous electoral mechanism in Hong Kong’s history.

Tens of thousands of protestors have taken to the streets of Hong Kong in recent days, defying calls to disperse demanding the Chinese government agrees to allow residents to freely elect the city’s next leader. The student-led demonstrations have sparked the worst unrest seen in the Asian financial hub since the 1997 handover which saw China regain sovereignty over the former British colony.

Demonstrations have expanded throughout the city calling for the resignation of chief executive Leung Chun-ying, bringing shopping and business districts to a standstill. Members of the protest movement, known as Occupy Central with Love and Peace, attempted to invade the city’s main government compound, prompting riot police to disperse crowds with tear gas and pepper spray.

The conduct of security forces galvanized sympathy for the movement, causing its ranks to swell over the weekend as the value of the Hong Kong dollar tumbled to a six-month low. Student leaders have vowed not to attend classes indefinitely until the city’s top leader steps down, while activists set up barricades and vow to continue their civil disobedience campaign.

Hong Kong operates with a high degree of autonomy under the framework of the “one country, two systems” model, which grants residents of the semi-autonomous island a higher degree of civil liberties, press freedom and political expression than citizens in mainland China. Activists believe the government in Beijing is intent on tightening control over the area to undermine existing freedoms.