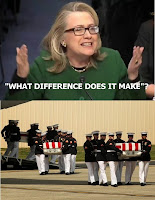 Speaking at the University of Buffalo, to an adoring audience, Hillary Clinton was interrupted by a man yelling “Benghazi!! You Let Them Die,” before he was escorted out and Hillary’s response and suggestion is ironic considering her out outburst to Congress over the same issue.

Both those videos will be shown below the article.

The University of Buffalo event:

“Benghazi, you let them die,” the heckler shouted.

“We have to be willing to come together as citizens to focus on the kind of future we want, which doesn’t include yelling. It includes sitting down and talking with one another,” Clinton said in response.

Hillary Clinton To Congress when questioned about her lies to the public about what happened on 9/11/12 when terrorists killed four Americans in Benghazi, Libya:

Fireworks erupted on Capitol Hill, as numerous Senators laid into outgoing Secretary of State Hillary Clinton regarding her role prior to and during the Benghazi terrorist attack on the anniversary of September 11th last year. A particularly heated exchange took place with Senator Ron Johnson of Wisconsin. At one point, Hillary Clinton exploded in barely contained fury:

“With all due respect, the fact is we had four dead Americans. Was it because of a protest or was it because of guys out for a walk one night decided to go kill some Americans? What difference at this point does it make?” Clinton asked the Republican Senator.

This is the woman that Democrats want to run for president in 2016.