Harvard is allowing the Satanic Temple, the same group that is attempting to have a statue of Satan (depicted as “Baphomet”) erected on the grounds of the Oklahoma State Capitol, to perform what is being called a “reenactment” of a Satanic Mass, at the Queen’s Head Pub in Memorial Hall at Harvard University on May 12.

A flyer with an image of a goat-headed, Satanic figure standing on an altar surrounded by damned souls was posted at the Harvard campus announcing the event. It states that the Harvard Extension Cultural Studies Club is hosting “a reenactment of a satanic black mass performed by The Satanic Temple with commentary and historical context .

The flyer further says the Mass will occur on May 12 at 8:30PM in the Queen’s Head Pub in Memorial Hall, and that admission is free. 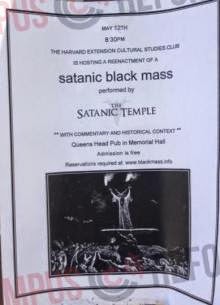 The Harvard Extension Hub has posted an official response to what they acknowledge is a “controversial” student event, stating in part “We are hosting a reenactment of a historical event known as a Black Mass. The performance is designed to be educational and is preceded by a lecture that provides the history, context, and origin of the Black Mass. While a piece of bread is used in the reenactment, the performance unequivocally does not include a consecrated host. Our purpose is not to denigrate any religion or faith, which would be repugnant to our educational purposes, but instead to learn and experience the history of different cultural practices. This performance is part of a larger effort to explore religious facets that continue to influence contemporary culture.

The rest of the official response to this Satanic Mass reenactment event can be found at the link above.

The first video below is a news report about this event and it’s controversial nature of the event, and the second video is from videographer LivinginGraceWOTW2, who states in the details ofthe video “This is an ABOMINATION to our Holy God, Satan has taken over our school system as the world is lulled to sleep, right when Jesus is at the door.“